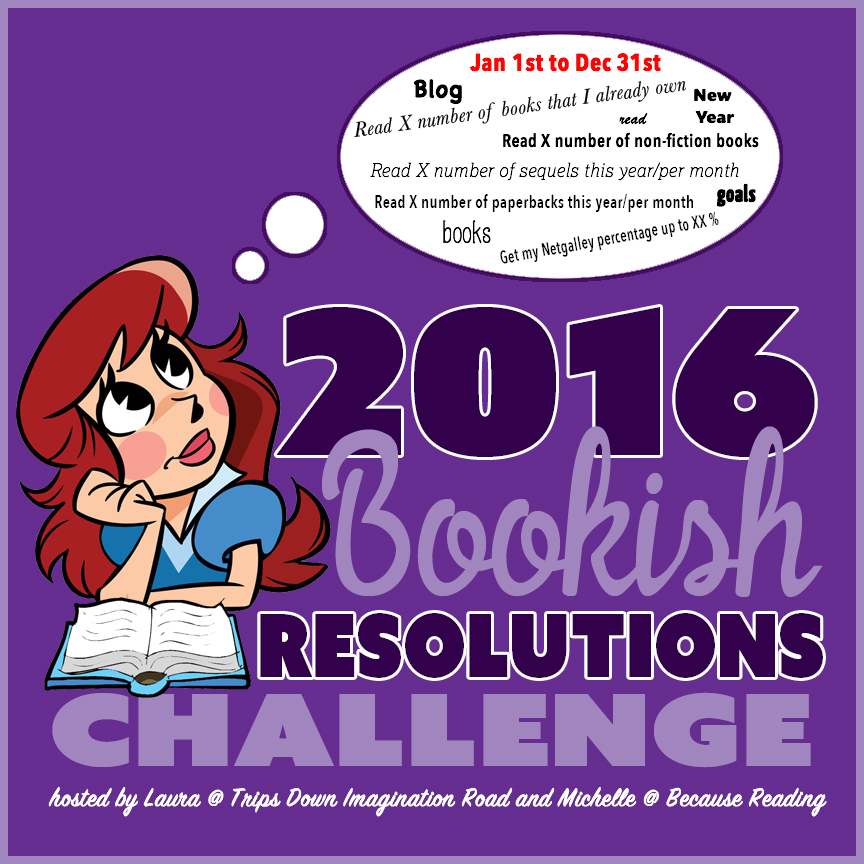 Because Reading and trips down imagination road

I'm not really big on making resolutions for each new year.  I did it once before in high school, and even though I don't really remember what resolutions I made, I know I didn't follow through... something about writing in a journal every day even if it was just the most trivial matter like: "I had chocolate chip waffles today."

But I'm going to try this challenge this year... because I'm not obsessive compulsive enough about all of my other challenges and book lists and book spreadsheets.

The point of this challenge is to set some goals and accomplish them for the new year.

And to be honest, I have more faith in completing my Reading Goals than I do for the other two Main Goals.  But I feel like it's high time I started holding myself accountable for certain declarations I make at random throughout the year (i.e., working out regularly, losing weight, cooking more often, learning new recipes, keeping in contact with friends, or reorganizing my life in general).

All 2016 Bookish Resolution Monthly Progress Update posts will be listed at the end of this blog post.

I also will be tracking all of my TTTs at a separate link here where I've already been listing all past TTTs--newest Top Tens will be added towards the bottom of the list, grouped by month.

- 2 - Continue to post Monthly Reading Wrap-ups... with a slightly less overwhelmingly bulky form.  These will also be tracked at a separate link here along with other post links for Ani's Book Abyss--end of the page under 'Reading Wrap-Up Posts', sub-heading '2016'.

- 3 - Create and try to maintain a blogging schedule--including publishing a blog post with significant bookish content at least twice a week (i.e. reviews, first impressions, reading updates... pretty much anything bookish).  I may attempt to create a monthly blogging schedule to plan out my posts for each month.  See the Monthly Update Posts below for monthly progress.

- Bonus Goal - Attempt participating in at least two other monthly/weekly bookish memes.  I am not giving myself a specified obligatory set number goal (again, trying to be a bit more realistic about my goals) and will be content just to participate when I have time.  I will announce which memes I've chosen after doing a bit more research.  These will be tracked here as well as on a separate Monthly/Weekly Meme page I will create at a later time.

To be totally honest, my one and only Reading Goal really should be to finish reading all of the series I've started reading in the past couple years... but we all know I will forever start reading 5 new series to every one series I finish reading.  So really, my goals are already challenging enough.

I will be tracking my Reading Goals here and on a 2016 Bookish Resolutions shelf along with update posts.

- 1 - Finish reading 10 completed series that I have already started reading.

His Fair Assassin by Robin LaFevers

The Lotus War by Jay Kristoff

- 2 - Catch up with 5 ongoing series that I have already started reading.

Already Read:  The Darkest Hour, No Place To Run, Hidden Away, Whispers in the Dark, Echoes at Dawn, Shades of Gray, Forged in Steele, After the Storm

Voodoo in Mojo by Stephanie Bond

- 4 - Participate in at least one Read-a-thon in 2016 (Bout of Books, Dewey's 24 Hour, any personal or community improv/unofficial read-a-thon, etc.)

I will list the post links in this space each time I post about a read-a-thon.  Links can also be found here under the heading 'Reading Challenge Posts', sub-heading '2016'--posts will be titled accordingly.

Goal Completed 1/10/2016 -- I have participated in at least one Read-a-thon in 2016.  I will continue to list any other read-a-thons if I continue to participate in others.

*novellas are part of The Sugar Cookie Sweetheart Swap anthology

**novella part of Behind the Red Doors anthology

I will try to track my progress here as well as with each monthly update post.  Monthly updates will be listed at the end of this summary post.

- 1 - Clock at least 2 hours of cardio workout each month.

- Bonus Goal -  Be better at being sociable, in general.  Respond to test messages and e-mails from friends, interact with people more often, respond to comments on my blog, etc....  I'm only holding myself accountable for this particular goal in a very vague manner because I know my own penchant for being a hermit and I figure it takes time to create a new, more social habit of talking to people.  See Monthly Update Posts for progress.

Again, this is not going to be easy.  And I even made up a few impromptu goals as I wrote this post--I had previously spent two weeks brainstorming goals, rewriting goals and trying to figure out what would work best for me, but what would also be a good challenge for me.

And this is what I came up with.  Personally, I'm more looking forward to my Personal Goals with hopes that this will help me a little bit, improving my lifestyle habits--especially getting into a routine of working out and getting back into healthier form.

But I'm absolutely giddy about tackling my Reading Goals.  Because I get to make more lists!!

And also, as we can see, I've already spent too much time elaborating on this post's format and how I'm going to track and list my goal accomplishments, etc....  I have the distinct feeling this goal tracking business might get a little out of hand...

Wish me luck and have a grand, happy new year to everyone!