Well...  I've been severely absent from the blogosphere for at least two or three weeks now, and I think I'm feeling up to blogging again.  The past couple weeks have just been a muddle of me not wanting to do anything but be lazy, read occasionally, and mindlessly watching YouTube videos about bullet journaling and cake decorating.

Sometimes you just need a hiatus, and unfortunately my hiatus came right at the end of Halloween Bingo 2019.  I think I just kind of lost steam and gave up on trying to read Halloween Bingo books altogether, which is probably the first time this has happened since the game's conception in 2016.  Even last year when I was going through on and off reading slumps, I managed to get myself a last moment burst and finished all the books I'd chosen for Halloween Bingo 2018--though that last book I'd finished after the bingo game duration.

Ah well, the reading still goes on.  I had originally planned to finish reading all of my chosen Halloween Bingo books for 2019... but after making no more progress in the past three weeks, I think I'm ready to just move on.  Of course, I'll still be pushing out a wrap up for Halloween Bingo 2019, if only just to put a proper closing on our previous reading game... maybe.  Don't be surprised if that doesn't actually happen though.  I'm still in lazy mode.

Meanwhile, I'm just going move onto the next reading game, The 24 Tasks of the Festive Season for 2019.  Of course, at the pace that I'm going, and with my sporadic absences from the blogging world this year, I have no doubt that I'll disappear randomly throughout these next two months.  But I'd like to do my part in collecting points for 24 Festive Tasks to add to the charitable donations.

I've already started with listening to the audio book version of The Lost World by Michael Crichton to fill in the book task for the first opened door, Dia de los Muertos--rereading a favorite from a now deceased author.

I'm also seeing a couple food tasks that I'd be more than happy to complete sometime these next two months.  Yay, food!  And then there's a crane folding task that I can totally do easily. 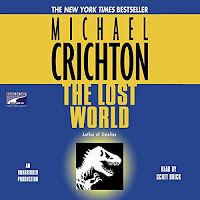 Coming Up In November

So it looks like I'm going to be winding down on progress for the last two months of the year.  I've already kind of lost interest in anything blogging or reading (gasp! blasphemy!), but I'm not going to force myself to do anything I'm not interested in.

But if I DO read anything, it'll be to finish some of the series I'm interested in finishing.  I'd like to put a well-rounded close to the Finishing School series by Gail Carriger and the Blackthorn & Grim series by Juliet Marillier.  These books can all easily fit into the 24 Festive Tasks games, so I'll at least be participating, too. Meanwhile, Pamela Clare will have a third Cobra Elite book coming out in December and I've yet to read her previous one, so I'm going to try to insert that one as well.

Meanwhile, I'll work on update posts for the 24 Festive Tasks as I think of them, so random updates may happen.

Otherwise, I'm not going to stick to any other really strict schedule or anything.  We'll just see how live plays out these next two months.