September seemed to come and go quite quickly, and now October is already into its second week.  As far as reading goes, I made decent progress for Halloween Bingo 2019, but at the rate that I'm going, it doesn't look like I'm likely to get a reading blackout by the end of the game's two-month duration.  Of course, that probably won't stop me from continuing forward just to finish reading all the books I'd like to read for Halloween Bingo.

In other news, I've been offline all weekend because my family and I just got back from a nice family vacation in New York!  It's been a long time since the entire family (my parents, my brothers, and I) have gone on an actual vacation together.  Visiting my elder brother in Texas, or my younger brother in Kansas City doesn't really count.

It wasn't a very long vacation and was really just the weekend, starting Friday and ending on Monday, but I feel like we still got a lot of things done, visiting Flushing Chinatown, Times Square, Central Park, the 9/11 Memorial, and generally just spending a lot of time walking around Manhattan and Flushing.  I even sort of learned how the Metro works, though it was a bit confusing at first.

Anyway, I'm planning a bit of a photo-journal-esque post to go up over the weekend.  I've been too tired from the vacation activities to really want to do anything but lay around, read, and be a vegetable.  So while I DID finish two books this weekend, I've written no reviews, and it took a while before I was even able to motivate myself to get back to blogging.

Hopefully, I'll get back into my normal rhythm soon, as I have two reviews that need to be written, a Halloween Bingo update post I want to get published, and one written review that needs to be edited and posted.  I also have a lot of clean-up to do, and have so far only gotten as far as doing my laundry.

Meanwhile, here are a few teaser photos, just in case I don't get around to my New York post this weekend.

Meanwhile, the pups also had a long weekend, having to be boarded at their respective pet hotels.  We got back into town nearing midnight, and so picked them up early the next morning.  After they both got a bath, Baby and Bear just kind of pooped out and had their nap time. 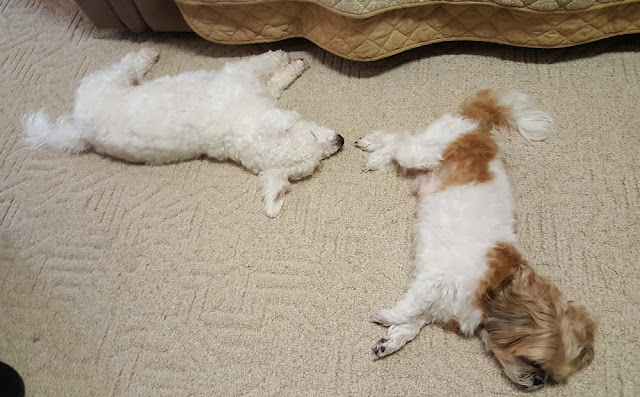 As much as I loved the vacation, it feels very good to be home.  The doggies seem to feel the same way as well!

On Hold until after Halloween Bingo.

Favorite reads:  So I had a lot of 4.0 Star books in September, which makes me really happy.  Each one of those books were wonderful, and of the four I listed above, I'd say that my favorite was Lost Among the Living by Simone St. James.

Disappointing reads:  My lowest rating was 3.0 Stars, which doesn't really mean anything since that's still an okay rating in my book.  I still liked the books I read and listed as my lowest rated books.  So if I had to choose one that kind of disappointed me, it would probably be Alisa Wood's book, Mercy Strange, simply based on how much I've liked all of her books so far as guilty pleasures.  Mercy Strange just didn't do it for me.

Coming Up In October

So my Halloween Bingo plans definitely changed, and some of the above books I'm tentatively wanting to read for the game.  Each of these books has a spot I can place them in, I hope, but if not, I've still got one more Transfiguration Spell in my hands.  But since I'm not entirely sure that I'm going to get a reading blackout anyway, I'm not too concerned.

As stated above, I've got some posts I'm prepping for post, hopefully throughout this week and the weekend.  I'm still on a vacation hangover, so the chances that all of my blogging plans will be dashed is very high.  It's possible I'll just keep reading and then do one big long update at the end of the month.  That's my mood right now, truth be told.