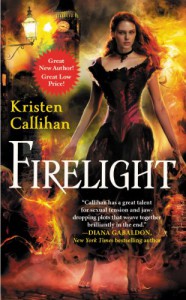 Miranda Ellis is a woman tormented.  Plagued since birth by a strange and powerful gift, she has spent her entire life struggling to control her exceptional abilities.  Yet one innocent but irreversible mistake has left her family's fortune decimated and forced her to wed London's most nefarious nobleman.

Lord Benjamin Archer is no ordinary man.  Doomed to hide his disfigured face behind masks, Archer knows it's selfish to take Miranda as his bride.  Yet he can't help being drawn to the flame-haired beauty whose touch sparks a passion he hasn't felt in a lifetime.  When Archer is accused of a series of gruesome murders, he gives in to the beastly nature he has fought so hard to hide from the world. But the curse that haunts him cannot be denied.  Now, to save his soul, Miranda will enter a world of dark magic and darker intrigue.  For only she can see the man hiding behind the mask.

Hmm... so going by what I recall of the prologue novella of this series, detailing some of the scattered tangents between Miranda and Archer before Firelight's story line...  I'm not certain this book really came off the way I'd been expecting it to.  I guess I'd been expecting something maybe a bit darker, maybe a bit more paranormal... maybe some more explosive fiery goodness...

Firelight is most definitely more romance than it is anything else.  There was an appropriate look into Archer's dark thoughts and Miranda's own misgivings.  There was a murder mystery.  There was even the typical society happenings.

I guess what I'd hoped to see was more of Miranda exploring her dark secret--her ability to summon and control fire.  And maybe I would have liked for Archer's dark secret to not have been dragged out for quite so long, only to be stuffed with a lot of sweet nothings spoken between Miranda and Archer about how much they love each other despite their secrets... BEFORE they even knew each other's secrets.

So yes, as a romance, this wasn't a terrible one if you can overlook some of the insta-lust, the insta-love, the over-intense possessiveness between our main characters, as well as their inability to think past their libidos for a good percentage of the book.  Also, even for the fact that, having read Ember, you KNOW that Miranda is not a young virgin, she certainly does act like one and I found myself wondering if the story was being rewritten or something.

Meanwhile, for that entire first half of the book, I'm not entirely sure I really understood what was actually going on in the romance between Miranda and Archer.  Their relationship came off kind of standard and boring, to be honest.  And it isn't until halfway into the book, when Miranda stops being meek, that their relationship starts feeling more sure-footed.

On that note, the excitement DOES start about halfway into the book at that same time that Miranda stops being meek, with more exploration of the murder mystery, the secrets pertaining to the West Moon Club and Archer's past, and then Miranda even starts taking charge of herself by hopping into the investigation.  This then eventually leads to Miranda's powers of fire manipulation making more of a show.  Because for the first half of the book, I'd wondered if we were going to capitalize on one of the biggest plot devices of this book at all when Miranda's powers are only ever mentioned in passing by her and her sisters.

But at that point in the story line, I think everything starts getting interesting.

There's a great premise in this book, as well as in this series, and by the end of the book, we've been introduced to the next book's main hero, who is obviously a werewolf, what with his references to the moon, and emphasis on his super strength and fast healing abilities.  I'm not entirely sure that our author was all that subtle about that, and I sort of wished she had been, because those mentions all seemed kind of forced.

Anyway, despite the slowness of the book's beginning, I rather enjoyed the book.  Save a fix for the pacing of the conflict, I think this could have been a great book, and I'm curious enough about the rest of the Darkest London world to continue on.