So I've been absent for long enough that I feel like I've been slacking off in my blogging life.  But things have been super busy around Chez Puppy House in the past week or so.  For the week of Fourth of July, while I was able to toss in a post about my bonus BLopoly rolls, I haven't really had much to do with reading. 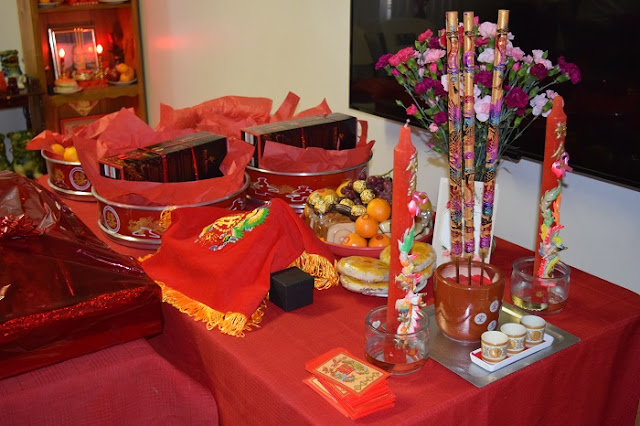 My big brother's wedding happened this past weekend, and the days leading up to it were full of LOTS of last minute preparations.  My brother and sister-in-law have expressed a wish not to have any of their photos shared outside of family and friends, so I won't be posting any of those.  But doggies and non-human subjects are all fair game...  Thus, the above picture is just of how the wedding gift trays, the wedding candles and incense, and the roast pig (on the far left that you can't really see) was set up.

As part of the tradition, these are the gifts we took to the bride's home, wherein they then split the gifts in half and return half to us.  We then commence with a brief tea ceremony of toasting her parents as they let their daughter be married off, then we bring the bride home wherein another tea ceremony happens with toasting tea to the groom's parents, as they welcome a new daughter into the family.

Ahh... traditions, they are interesting to learn about as they happen, though this isn't the first Vietnamese/Chinese wedding we've had in recent years.  Two years ago at about the same time, my younger brother was married and a lot of the same things happened.

But anyway... back to the wedding prep chaos... my sister-in-law wanted to build her own bouquets, boutineers, and flower display decorations in order to save on money.  So we spent a few hours just messing around with that a couple days before the wedding.  There were tons of flowers to play with, and I'd say that the results were quite beautiful.  My sister-in-law is a woman of many resources.

Meanwhile, my brother wanted the introduction of the wedding party at the evening dinner reception to be unique, so they also spent some time practicing a choreographed dance, lasting the first minute or so of the Korean pop song, Boy With Luv by BTS.  I've linked the official BTS dance practice video if anyone is curious as to how the dance was supposed to look.

In actuality, they only made it about fifteen seconds into the dance moves, then ended up doing a freestyle to their seats, which was also fun.  But the most important part was that they had a lot of fun, even if their end result was still kind of messy.  I'm not sure anyone at the reception really noticed anyway.

Meanwhile, my job during the entirety of the day, aside from playing personal family photographer during the tea ceremony in the morning, was dog-sitting. 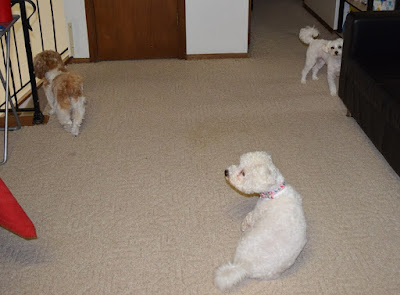 The pups had free reign of the house for a little bit during the early morning.  Meanwhile, Yogi and Bear were put into their spiffy wedding attire, as the puppers belonging to the bride and groom, to celebrate with them. 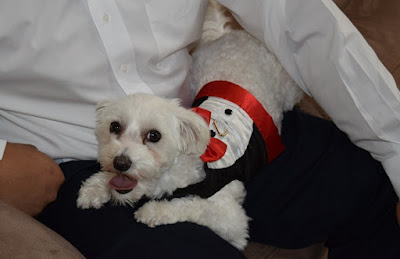 Here's Yogi in his cute little doggie tux, as he makes himself comfortable in my cousin's lap. 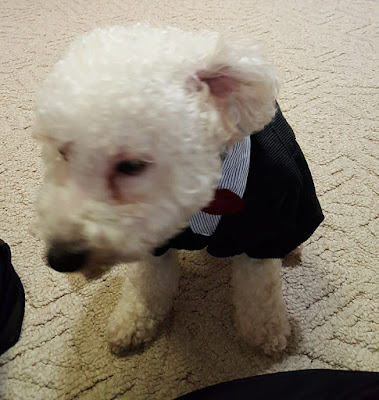 And here's Bear in a formal suit with bow-tie.  Please excuse the photo as Bear was moving his head in the way of my camera and I couldn't get a better pic afterwards either.

And if anyone is wondering, Baby didn't have a suit since he wasn't really part of the wedding.  Meanwhile, Yogi and Bear were allowed to come out to the dinner reception venue and be in parts of the reception with their human parents.

The days following after the wedding really was just a recovery phase for most of us who either had too much fun, or were achy and sore from the long festivities of the day as well as the clean-up afterwards.

And then, in my own little reading world, I kind of couldn't get back into reading or blogging for a another couple days, which is why this monthly wrap up is about two weeks late.  Whether my mind was just distracted, or exhausted, I don't know, but I just haven't been into anything bookish in days.

However, I'm hoping that I'm moving back into my bookish world now, and we're picking up where I last left off with the Fourth of July bonus rolls, and the regular roll I had been reading for before that.  Yeah, I'm seriously behind in my reading.  But I'm also stubborn enough to finish reading for all the squares I've landed on before moving forward.

So as a fair warning, I'll probably be AWOL for another duration of time while I try to catch up on my reading.  There may or may not be a review or two posted as we move forward.

Thanks for reading my rambles, everyone!  Now onto the bookish part of this post!

Favorite reads:  As I mentioned above, 7 out of the 8 books I read in June had a rating of 3.5 Stars.  This is a fairly mediocre rating for me, but if I had to choose one or two books that were my favorite, they would probably be either Going Rogue by Robin Benway, or Stone Cold Heart by Laura Griffin.

Disappointing reads:  Obviously as the only book rated 3.0 Stars in June, Wolfskin by Juliet Marillier was the lowest rated book as well as the book I was quite unimpressed and disappointed in.

Coming Up In July

So hopefully the rest of the month won't simply be about me catching up on books that I'd intended to have finished more towards the beginning of July.  Unfortunately, I feel like that's probably what's going to happen if I don't get my act together.  The above books I've listed as my tentative reads include the next Haruhi Suzumiya book which I hope to insert at some point in the month, as well as Sourcery by Terry Pratchett, a book I'm overdue to have read along with the Discworld book club.  But I'm just going to take things at my own pace and enjoy.

Meanwhile, the other four books are the ones I've chosen to fulfill the BLopoly Fourth of July bonus rolls.  So as soon as I finish my current reads, I'm going to move into Wonder Woman: Warbringer by Leigh Bardugo, then Silence for the Dead by Simone St. James, Sharp Edges by Jayne Ann Krentz, and Her Deadly Secrets by Laura Griffin.  Although I probably won't be finishing them in that order, since all but one are books I own.  I just checked out Silence for the Dead via e-book library and might focus on that one first.