Brief Thoughts: Lost Among the Living 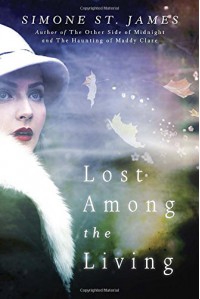 Lost Among the Living

England, 1921.  Three years after her husband, Alex, disappeared, shot down over Germany, Jo Manders still mourns his loss.  Working as a paid companion to Alex's wealthy, condescending aunt, Dottie Forsyth, Jo travels to the family’s estate in the Sussex countryside.  But there is much she never knew about her husband’s origins… and the revelation of a mysterious death in the Forsyths’ past is just the beginning…

All is not well at Wych Elm House.  Dottie's husband is distant, and her son was grievously injured in the war.  Footsteps follow Jo down empty halls, and items in her bedroom are eerily rearranged.  The locals say the family is cursed, and that a ghost in the woods has never rested.  And when Jo discovers her husband’s darkest secrets, she wonders if she ever really knew him.  Isolated in a place of deception and grief, she must find the truth or lose herself forever.

And then a familiar stranger arrives at Wych Elm House…

There was a lot going on in this book, but I found myself really loving it.  Between the atmosphere and the haunted house premise, as well as Jo's character, this is probably my second favorite of Simone St. James's books I've read.  Of course, when we got into a lot of the pre- and post- Great War tangents, as well as the big surprise twist in the end, the story might have started untangling a little bit.

And the truth is, I saw the plot point concerning the mystery behind Alex's disappearance from ten miles away.  It was pretty obvious so I wasn't so surprised when the big surprise twist came around.  Hopefully, I've given nothing away, but, again, it was pretty obvious from the beginning where St. James was going with her story.

If it's one thing that St. James seems able to do, it's create appropriately creepy atmospheres involving all the hauntings depicted in her books.  Truth, I felt a very big chill go through me in the beginning, when Jo first arrives at Wych Elm House, and sees the girl sitting silently in the parlor.  Something about the way that scene was described was so vivid that I couldn't help seeing it in my own mind and being dutifully freaked out.  A lot of the other later scenes, such as when Jo sees the ghost girl Frances walk past her bedroom door out of the corner of her eye was also a great scary, and atmospheric moment.

Jo's story was a good one, with a wonderfully strong starting point, but I feel like the characters' directions kind of got lost when more plot devices started getting added to the book.  So this book wasn't entirely perfect, but it was entertaining enough that I really, really liked it.