So it took a little bit of time, but I've finally finished reading all the books for my previous rolls (Roll #3 and Memorial Day Bonuses).  I wish I could blame one particular book for bogging me down (*coughcough*Wolfskin*coughcough*), but the truth is, I've been distracted, and it's been a busy couple weeks.  Of course, I HAD considered cutting my losses with Wolfskin, but between my own stubbornness as well as the fact that the book DID start getting interesting after a while, I went ahead and finished the darn thing.  I knew that I was going to read Run to Ground and A Grave Matter anyway, so I wasn't worried about those two books, really.

Long story short, for a while I thought of only reading up to a certain point for Wolfskin and maybe just claiming $3 or something.  But I persevered and now I have $5... and the book wasn't really that bad, truth be told.  I enjoyed it to an extent.  Just a bit draggy.

But, to be hones, it wasn't necessarily the book that was the main culprit of my reading drag.  Things had been kind of busy in non-bookish-landia.  As I'd stated in another update, my older brother's wedding will be coming up soon, and we've been pretty busy helping with some last minute preparations, and one of those preparations involved a road trip out of town for the purpose of procuring the ordering of a roast pig for the ceremony.

Meanwhile, here's a brief photo update of the end of Week One of "Bear-sitting". 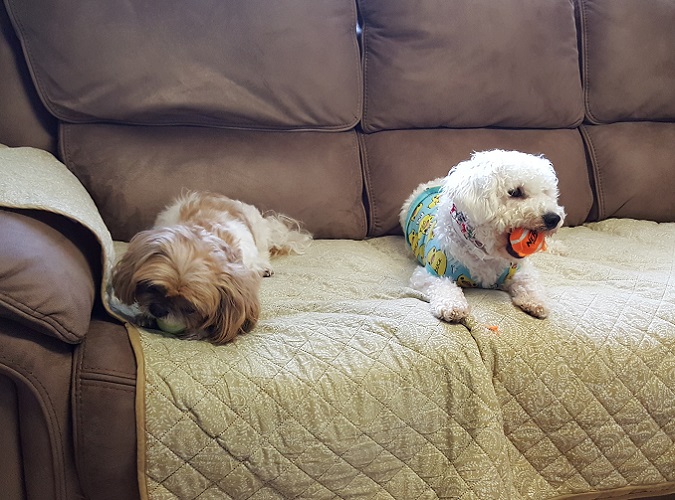 The two of them look like they're getting along, but don't be fooled...  They've been growly with each other, and Bear actually sat on Baby the other day and nipped his ear.  Poor Baby, being a Shih-tzu, barely has a snout, so with his baby corn teeth, he's kind of at a disadvantage.  Bear got grounded for a little bit until he calmed down a bit.

Other times, they seem to be fine, like when they sit together in the above photo, or when they're watching the front door together.  Fingers crossed that they learn to get along before the two weeks is up, but with Baby's cranky ol' man demeanor, and Bear's hyperactive nosiness, I'm just glad that both of them are at least well trained enough to listen when we tell them to stop fighting.

It's like having teenagers in the house, teeth and growls and whines and everything.


But anyway... Moving along back to BL-opoly...

I will have a review for Wolfskin and A Grave Matter out pretty soon in the next week.  The review for Run to Ground is in this package bundle of reviews linked here.

With the completion of these books, I am now at $39.  Originally, I had thought that Run to Ground was 416 pages, according to sources and my own Kindle version, but the main book itself actually ends at 75%, which I calculated out to be 312 pages, thus only giving me $3 instead of the $5 I'd anticipated.  The rest of the book were just "cut scenes" that the author had to edit out of her final product, and an excerpt for the next book.  So I'm only going to claim $3 for Run to Ground.

And now onto the next roll!

Roll #6 gave me 10 which took me to Novelty Card Race Car, successfully turning Roll #6 into Roll #6a. 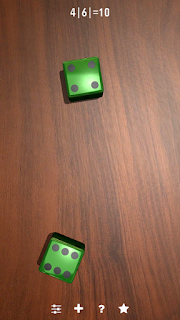 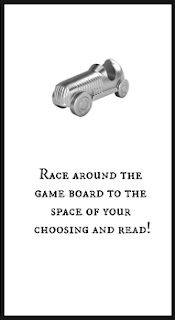 Meanwhile, I'm also passing GO, which allows me to collect $5 on my way through!  This brings my Total Bank to $44 at this time. 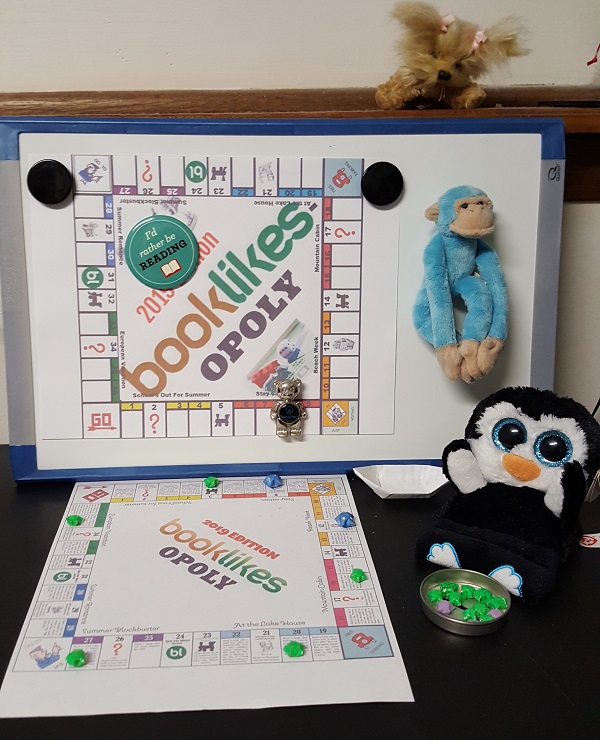 Yeah... I know I took longer than we all liked to get to the next roll, but Monkey need not look so dejected.  I got a Novelty Card, isn't that great?  No?  Okay, fine.  Be that way.  At least Penni's looking excited to be the keeper of the stars.  Especially now that she's working on some color coding for completed squares, active squares, and cards in my pocket.  Right, Penni? 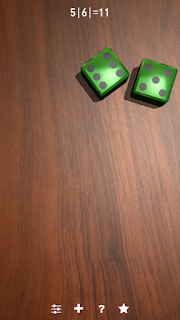 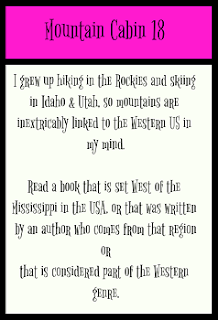 Roll #6b gets me an 11 and I continue onto Mountain Cabin 18: Read a book that is set west of the Mississippi in the USA, or that was written by an author who comes from that region, or that is considered part of the Western genre. 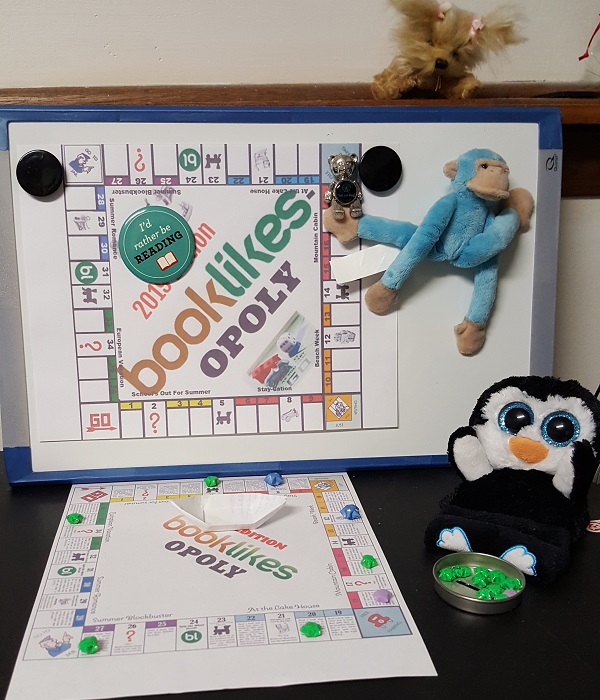 Well... Monkey's looking a little livelier, but still a bit gloomy.  And yes, I know, we're running out of poses, but Penni's happy, and Keychain Puppy seems to be enjoying herself...

But here's a photo of two pups playing to liven things up a bit more? 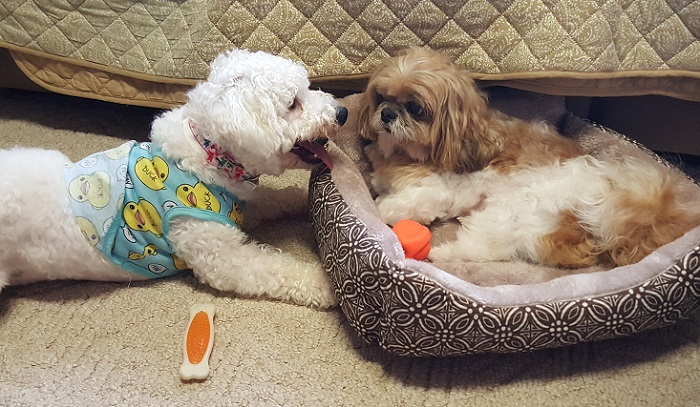 Though I'm not sure Baby's having really all that much fun himself being stared at like that.


As far as book choices go, I was hoping I'd end up on a square where I could read two particular books, Sourcery by Terry Pratchett, or The Indignation of Haruhi Suzumiya by Nagaru Tanigawa.  But neither of these books will fit into Mountain Cabin 18. 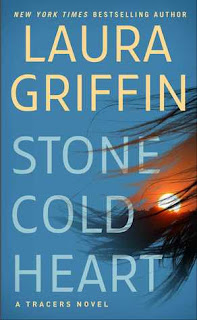 I will be reading Stone Cold Heart by Laura Griffin, the newest release in her Tracers series which I've been trying to find time for.  The book takes place in Texas, which, according to the map I found of states west of the Mississippi, fits right in.  The paperback I own is 357 pages long, which will add $3 to my total bank when completed.