This BL-opoly update is brought to you by "Two Sleepy Puppers at the Top of the Stairs." 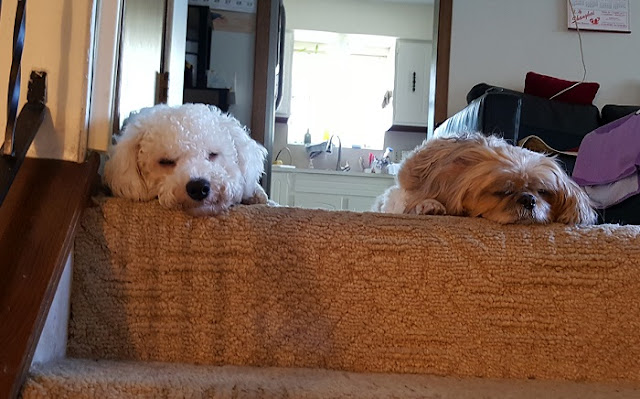 I'm not sure what they've been doing, but they look wiped!  And excuse the weird lighting.

For my previous roll, I read the last Circle of Evil book, Facing Evil, by Kylie Brant, which was 314 pages, gaining me $3 to add to my bank.  A rather mediocre read, but still enjoyable.  A series review will be forthcoming when the busy quiets down a little bit.

I ended up finishing this book mere minutes before midnight on 6/28, but being way too tired, I didn't actually roll until this morning (6/29) right before heading to work.  So I've spent most of my day during any dead time at work trying to choose a book.  After a long twelve-hour shift, and some other family stuff, I'm finally able to sit down and put together this update, though the truth is, I really ought to be heading to bed.

So here are the roll details: 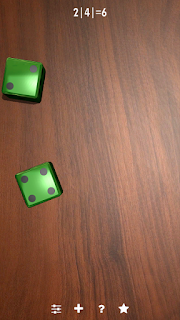 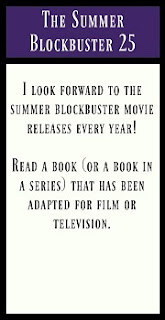 I rolled a 6, which landed me on The Summer Blockbuster 25. 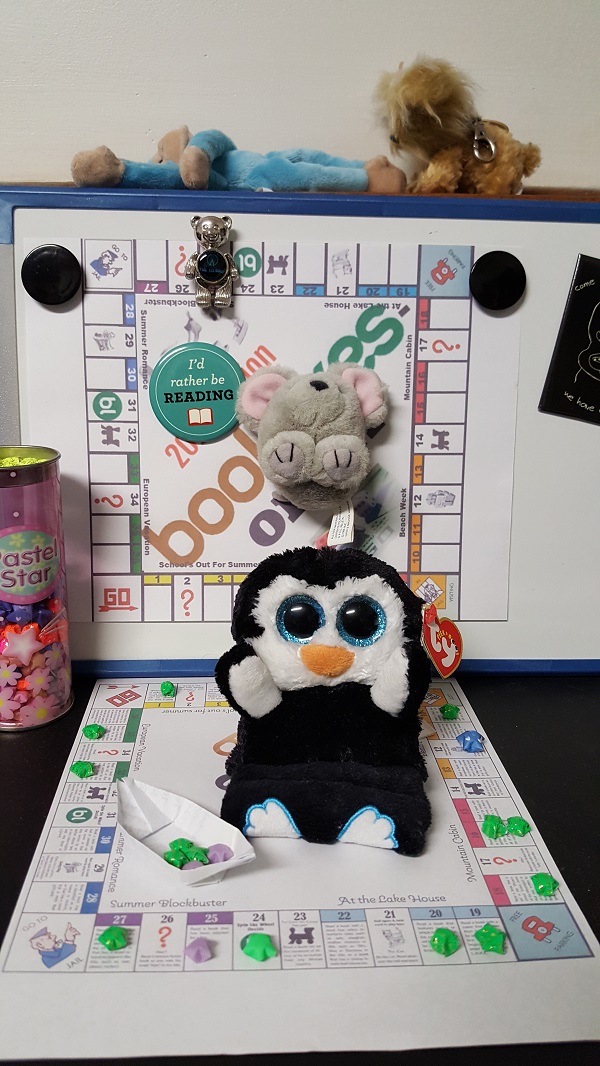 After climbing the walls, it looks like Monkey has worn himself out.  Silly Monkey.  So now Magnetic Mouse will be hosting the board in his place while Penni cheers on, and Keychain Puppy... sniffs Monkey's feet, for whatever reason.  Unfortunately, Magnetic Mouse doesn't have as many movable limbs as Monkey does, so Mousey is just going to... well, stick to the board and look important, I guess.


I thought that I would have to pull a novelty card for this square, since I couldn't really think of a book I wanted to read that had been made into a movie or television series.  I had briefly considered listening to The Lost World by Michael Crichton, but I'm not sure I'm in the mood for a reread...

However, it turns out I DO have a few options that I'm considering, after spending most of the day doing some searching.  In fact, all of the below books I've listed, I'm truly interested in reading, and hadn't realized that they were adapted into film and/or television.

I guess that Nora Roberts had had some of her books adapted into Lifetime movies (none of which I've seen), and I'm always up for a Nora Roberts book.  Sanctuary is one of those books adapted to a movie, and also a paperback I already own that's been sitting on my shelf for some time.  It ends at 435 pages, which will get me a $5 reward if I choose to read it.  In truth, I had actually been more interested in either Blue Smoke or Carolina Moon, but neither of those two books are immediately available to me without either spending some money, or running to the library on Monday (since I'm working past the library's open hours this weekend), and I don't want to wait until Monday to choose a book.

A Morbid Taste for Bones by Ellis Peters, has been adapted into a television series, back in 1994.  I've been considering this book for some time as well, and have heard great things about it.  This book, however, is only 199 pages, which is like, two pages shy of the $3 mark.  Amazon notes the book at 213 pages, but other sources are all listing the paperback versions at either 199 or 197.  I want to read it, but I'm also miffed that after finishing this book, I will only earn $2, when it's so close to the next cash level.

Cocaine Blues by Kerry Greenwood is also a series that's been adapted into a television series, called Miss Fisher's Murder Mysteries.  This book presents at 185 pages, so would only be $2.

Mindhunter by John Douglas is a true crime book that I've been meaning to read for a long time, and which has been sitting on my bookshelf for a few years.  Apparently, there's a Netflix series based on this book that I didn't know about.  Mindhunter is 384 pages, which would be $3 if I choose to read it.