Thoughts: Silent in the Grave 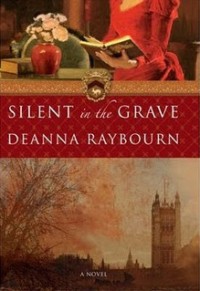 Silent in the Grave

I’m not sure it’s possible to be more surprised than I am to realize how well I predicted the identity of the murderer and the motives behind it. And the amusing part is that I was really just joking with my BFF as we were doing an off-hand discussion about the book.

At this time in our buddy read, she was already 50% into the book while I had just gotten to chapter ten. And just from going by instinct and typical murder mystery patterns, I flippantly stated, “I’m fairly suspicious of so-and-so.” But I didn’t really give any reasons to her why, and so we ended up discussing other possibilities too and she told me who she thought was the killer.

Honestly, as I’d stated, I’m kind of impressed with myself, not only because I guessed the killer before getting too far into the book, but because the developments in Silent in the Grave and all the red herrings thrown about actually gave the reader a lot of twists and turns to think about. There was the plausibility of the killer being who I had off-handedly thought it was, but the possibility of it being one of several other suspects was even greater.

So my ready prediction--plain luck, I guess.

"Let the wicked be ashamed, and let them be silent in the grave."

These ominous words are the last threat that the darling of London society, Sir Edward Grey, receives from his killer. Before he can show them to Nicholas Brisbane, the private inquiry agent he has retained for his protection, Sir Edward collapses and dies at his London home, in the presence of his wife, Julia, and a roomful of dinner guests.

Julia is outraged when Brisbane visits and suggests that Sir Edward has been murdered. It is a reaction she comes to regret when she discovers the damning paper for herself, and realizes the truth. Determined to bring her husband's murderer to justice, Julia engages the enigmatic Brisbane to help her investigate Edward's demise, following a trail of clues that lead her to even more unpleasant truths, and ever closer to a killer who waits expectantly for her arrival.

My Thoughts:
Revelation aside, Silent in the Grave might have had a lot of little frustrating moments throughout the read--Julia certainly had me sighing in exasperation many times over with her careless antics, and Brisbane still comes off as an arrogant asshole up until the end of the book--but overall, I really enjoyed myself with this read. Witty and thoughtful, Silent in the Grave is an excellent book with a good balance of everyday banal activities strewn about a murder investigation.

While at times I felt like it could have tried to stay on track just a little bit more, I actually kind of appreciated the little tangents of side stories here and there. It gives you lots of perspective about Julia and her family, and makes it easy to fall in love with her, even though she manages to bumble her way into trouble more times than I would have liked.

Truth is, Julia is a well-developed character, way too modern for her own era. Coming from a family of radical personalities, it was extremely entertaining to read along with her as she presents to us what goes on in her mind, and tells us about the little things that have happened as she grew up in and amidst her family. So, at times, it was a little hard to keep up with her, but it was still a lot of fun.

There are two fairly frustrating traits about Julia, however, that I wish could have been developed more as the story progressed. As the conclusion came about, I’m not entirely sure she realizes these things about herself, and even if she did, it didn’t seem like she was too keen on improving.

But in spite of her faults I DO really like Julia.

I like that she’s got a quick wit and she’s keen to observation. I like that she’s a readily likable person in spite of the prejudices and stereotyped thoughts she has acquired through her upbringing. I like that she tries so hard to be thoughtful and kind. But I like that she knows how to make use of her position of power to get what she needs for, I guess for the lack of a better word, “the greater good”--for herself, for her siblings and friends, for her staff, and for the furthering of her husband’s murder investigation.

I like that she’s quick to admit her faults when she has royally screwed up. But as already stated, I don’t like that she is constantly viewing everything that upsets Brisbane as her fault. There were several times when it seemed highly unnecessary for her to feel ashamed or to apologize for something she did, when she HADN’T even known it was the wrong thing to do in the first place.


Some Final Thoughts:
Specifically about the rating of this book and this particular review:

When I finished the book, I was set on a 3.5 Star rating, if only because of the few things that really frustrated me. Upon finishing this book, I wasn’t entirely certain how I felt about it, and had come to the plan of writing a duo list of “What I Like” and “What I Didn’t Like” about this book as the review.

But upon finally sitting down and really giving it some thought, some of my decisions changed.

For one, my thoughts just managed to stream out in a rambling monologue without any difficulty. Erego, review written, even if haphazardly.

Secondly, I decided that despite all the quibbles and faults and frustrations I found with Julia’s behavior and Brisbane’s assholery and the story’s random, possibly unnecessary tangents, I overall really DID enjoy reading Silent in the Grave. The writing is fantastic, even if, maybe a little too easy to read. The characters are colorful and entertaining. The mystery is set up quite well. And the book didn’t focus a hundred percent on the romance, even IF I thought that Julia spent too much time basing her actions and desires on how Brisbane would react.


Side tangent: This was one of the bigger detractors from my enjoyment of this book--the fact that Julia’s notions of having a romantic love story, or just a romantic grand story were quite obvious. And it was a bit frustrating too. After the discussion with my BFF about this book, I came to the conclusion that I didn’t much care for how Julia felt like she needed to fall, head-over-ass to do what she could to impress Brisbane.

I get that Julia’s life before her husband’s death was quite plain and boring. And maybe she really just needed something to do with herself outside of the typical noble lady’s everyday piddling around. She’d admitted to herself that she wanted a romantic adventure akin to something storybook-like.

And being around Brisbane satisfied a lot of these desires: a Byronic hero as a potential love interest; an intriguing murder mystery, even though it might have hit too close to home; and the romantic ideals of adventures in sleuthing.

So I kind of get it… I guess. But it doesn’t mean I have to like it. Continuing to read through how Julia based so many of her actions and decisions on how Brisbane would react when he found her out was a bit deflating. Especially when I’d been really hoping to follow an independent female lead, a forward thinking woman of her times; someone who is above needing romance and men to define her life for her.

I suppose this is what many other reviewers meant when they said that this book is after all, a romance, first and foremost (and a Harlequin love child, at that).


In the end, however, this was still such an extremely entertaining book that I feel I’m entitled to be a little biased towards my enjoyment.

Oh, and also, I still think Nicholas Brisbane is somewhat of an arrogant asshole and I didn’t really care for him. I’ve never been keen on a love interest expending so much time and energy flinging insults at the other person so readily, and sometimes without provocation. It was a bit unsettling that Julia was so obsessed with him despite how rude he was always acting towards her.

Maybe I’ll come to like Brisbane at some point in time. But somehow, I really doubt it unless he does something quite redeeming for Julia.