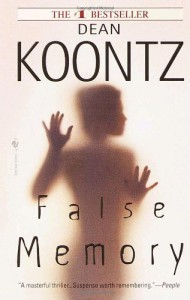 
I know I've read books before where I wished there were a fast-forward button--where you can still sort of understand what's going on, but reach the ending more quickly, bypassing all those unnecessarily dragged out scenes.  Because there were descriptions so detailed and trivial and meandering that my head started to hurt.

Have you ever spent three or five pages reading about the main character of a book contemplating the dangers of her kitchen knife rack, only to take another three pages of book to realize that she would be the dangerous one if she wielded said knives for violence?  It took that many pages for our main character, Martie, to decide that the knives in the knife rack needed to be disposed of for those reasons.

Maybe it's to emphasize the seriousness of her newly discovered fear of her violent side, but that is still a lot of time to contemplate the knives in a knife rack.  Then there was even an entire chapter dedicated to the contemplation of potentially dangerous items in one of the kitchen drawers.

Meanwhile, Dusty and his brother spent about two pages discussing what the Angel of Death looks like... which I suppose could merit two pages of text... maybe.


I've always enjoyed reading Dean Koontz.  I really have.  He's got some gems out there; some great psychological thrillers that really just hook you in and keep you hooked until the end.  Koontz writes great work, with some super creative plots and thrilling scenarios.  His writing style is consistently familiar (with the exception of one particular book I read recently), though he does often change some parts of his style, ever so subtly, but just enough that it either makes or breaks the book.

For better or worse, I've always found that I either like a Dean Koontz novel, or I don't--there's rarely an in-between.

But an excellent writer he is, which is probably why I keep coming back to him, even if I don't always pick up his books.

False Memory is one book that I didn't really care for.  It had potential, which was what got me excited about it in the first place.  I had come across a summary somewhere that mentioned a character with agoraphobia, and the idea of exploring such a psychological thriller with such a character seemed interesting.  Then I learned that it was actually about a character who was afraid of her own shadow and her own reflection in the mirror--not agoraphobia, but something that I learned was called auto-phobia.

But the book drags out for a long time with a lot of build up.  Then continues to drag out some more.  I'd say that the first couple chapters weren't bad; and then the last few chapters were the more exciting, even if the conclusion was kind of sticky.


The Story:
None of the summaries from the book sites really tells you much about this book, and my copy only gives taglines that are supposed to draw you in--admittedly, it DID work on me.

Basically, the book opens with Martie Rhodes suffering some strange bout of panic attack, fearing her own shadow, fearing her own reflection in the mirror.  But she sucks it up and heads out to collect her best friend, Susan who has agoraphobia, and needs to be forcefully coaxed out of her home in order to make it to her psychiatrist's appointment.  It's a battle of wills each time she accompanies her friend out the door.

But this time more so as Martie realizes that she's suffering some sort of panic-induced affliction of her own that she can't seem to explain away--while the sight of her own reflection in mirrors frightens her, she is more frightened by the fact that she's seeing sharp objects such as a knife or even the tines of a fork, and thinking about how easy it is to inflict violence or death with these items.  This blood lust is a whole different side of her she's never experienced before and it frightens her that she doesn't know where its coming from.

Meanwhile, Dusty Rhodes spends the morning coaxing his half-brother, Skeet, off a rooftop where the disturbed young man has claimed that he's ready to cross over and meet the Angel of Death.  Checking Skeet into a hospital after this event, Dusty discovers something disturbing about Skeet's demeanor that seems almost fugue-like, after having a strange conversation in which Skeet appears completely detached from his own consciousness.

Concerned that something doesn't seem right, Dusty returns home only to find that Martie is suddenly on a rampage through their house to destroy anything and everything that might be used as a weapon to harm or kill.  Over the course of the day, Martie had somehow come to the conclusion that if she doesn't do as much, she would be a danger to everyone around her, most especially her own loving husband.


My Thoughts:
Obviously, my summary still doesn't do much, but for fear of giving too much away, I realized I had to stop somewhere.  Truth, there's just way too much going on in this book... or rather, way too much going on that doesn't seem to progress the story very far even after the first 200 pages.  Except that, within those first 200 pages, we are already told what the bigger conflict is, in a very disturbing scene involving Susan Jagger and her psychiatrist.

And to be honest, that development wasn't really all too surprising, and was in fact quite predictable.  Koontz is never subtle about his hints.

But anyway, as I stated in the first few paragraphs of this review, before my half-baked summary blurb, there are a lot of drawn out details and descriptions used to show us one particular scene, that, in the long run of the book itself, seems highly unnecessary.

It's Dean Koontz at his wordiest, show-casing how well he can create images with his words.  Don't get me wrong, the descriptions are done well, the scenes are told in painstakingly wonderful detail--maybe a little too deliberately detailed for my liking--and Koontz's typical dry, sarcastic, and quirky personality shows in dialogue and monologue through the characters and their interactions.

Even a little dark humor shows wherein you want to laugh, even though you are aware that it is a highly inappropriate thing to laugh about.  After all, I do not doubt how disturbing things would be for someone to wake up one morning, and suddenly have thoughts of all the ways one could use any object to maim or kill another person, thus rendering said someone scared of almost everything in sight; though most especially rendering said someone scared of her own self and the potential for violence.

Washing out the glass, he turned his back to her, and she said, "Hey," sharply, and he faced her while he dried it, so she wouldn't have a chance to sneak up on him and beat him to death with a can of pork and beans.

They were not going to be able to take Valet on his morning constitutional.  Martie refused to stay here alone while Dusty went out with the dog.  And if she accompanied them, she would no doubt be terrified of pushing Dusty in front of a truck and feeding Valet into some gardener's portable woodchipper.

"There's a pretty funny aspect to all this," Dusty said.

"There's nothing funny about it," she grimly disagreed.

Koontz's quirky humor is all over this book, in both of his main characters, and even in some of the side characters.  Which is great, except that, even with all his pains to make his characters seem unique and alive... they come out seeming like super special, super perfect people, who are actually kind of flat.  I mean, I love that Koontz has the penchant to maintain a sense of goodness and justice within his main characters; that you know that his stories will always have a satisfying, well-rounded ending.

And, once again, damn if it didn't feel like this book may have been two or three hundred pages too long because of his drawn out, overly descriptive scenes!

Even nearing the end, it took one of our main characters a good two chapters or so to assess a potentially dangerous situation involving two bad guys, some shooting, and whether or not she should take action and hunt them down before they turned around and hunted her.  It's detailed, I'll give you that.  But it was also frustratingly dragged out until you just wanted to tell her to just let Dusty out of the trunk and regroup--make a decision already!

This book wasn't entirely terrible--it was written well, as Koontz is wont to do.  And once again, the characters aren't bad.  On paper, they're actually kind of interesting.  In action, and spread across 700+ pages of a paperback novel, they got kind of boring pretty quickly.

Mainly, what didn't help was that, less than 30% into the book, I already had a stinking suspicion of what Koontz had in store for us for the rest of the book... and I was right.  Then it was just a matter of getting through the last 500 pages of the book to figure out how everything resolves itself in the end.  I didn't want to stop reading, because there were still some factors that needed answers.  I didn't want to stop reading because I just wanted to see how the situation would play out.  Because, in a way, the story was locked into a possibly impossible resolution for the good guys.

I wanted to see how good would triumph over evil!  Or something like that...

But then, in the end, as I'd already stated, the conclusion was a typical Dean Koontz ending, even if a sticky one that seemed debatable.


No increase in Bank.