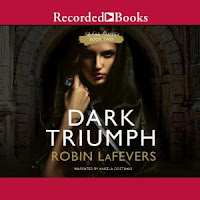 To start off, I probably should warn people about the presence of the fairly incestuous relationship that takes place between Sybella and her brother Julian; just in case anyone might have difficulty accepting this in their reading diets.  It's not entirely a heavy focus, though, since we see a lot more of the obsessive love on Julian's side.  While Sybella is merely playing a part as part of her assignment, and has no desire to encourage this relationship, Julian is very much in love with her.

If we compare Dark Triumph to Grave Mercy, there was a lot more focus on the political and war strategies significant to the Duchess Anne and her Duchy of Brittany in Grave Mercy.  Sure, you still see a lot of personal growth and development on Ismae's side of things, but her growth really DID also follow along with how she aided her young Duchess.

Dark Triumph's focus, on the other hand, was more heavily centered on Sybella: her vengeance, her mental and emotional stability, her revelations, and how she would figure out how to survive her own fatalism.  And it was definitely an emotional ride with everything that this girl had to go through.  Because if ever there was someone who attracted trouble and death, it definitely would be Sybella.

Many other readers were stating that Dark Triumph was much darker than Grave Mercy--this is definitely true.  But I can't help feeling like the execution of the story felt almost too deliberately created to be dark, so much so that it felt outrageous at times... or maybe it was just that Sybella's first person narration was heavily influenced by her own mental and emotional instabilities that it felt that way.

Whatever the reason is, it was definitely an emotional journey, and you definitely find it hard not to feel for Sybella throughout it all.


The Story:
Sybella had run away from the life that was slowly driving her mad, coming upon the Convent of St. Mortain, and learning that there might be hope in her life after all.  For she has been told that she is really the daughter of Death, himself, and can finally split her ties with the evilness of the father she's known her entire life, the terrible Count d'Albret, who serves no one but his own malicious desires.  But then the convent decides that the best way for her to serve their saint is to return to the darkness that is her family, to the brutal father who wouldn't hesitate to use her or kill her, to the brother who loves her to the point of unsettling obsession, and to a court full of people who would more likely betray you for any number of reasons.

The Reverend Mother has promised that Sybella would be the one to mete out final justice to the Count d'Albret, to rid the world of his vile existence, to avenge her lost innocent childhood and all those who have suffered thanks to this man.  But she has yet to find the mark of death on him, and this continued service to Death, as directed by the convent, is again, slowly driving her mad.

Then the convent sends a new order: she is to find and help free the captured knight known as Benebic de Waroch, and aid in his delivery to the Duchess in Rennes.

This creates a whole new dilemma for Sybella, as it could jeopardize her chances of remaining at Nantes in her father's presence--it would definitely put a kink in her carefully laid plans to kill d'Albret as she'd been promised she could do.

And even as she follows the convent's orders, she begins to question the existence of Mortain and her role as his handmaiden.  Because if she isn't really Mortain's daughter, then that would mean that she is truly the daughter of the evil d'Albret; and that is absolutely unacceptable to Sybella as it would mean that all her hopes have come to nothing.

Final Thoughts:
I ended up listening to the audio book of Dark Triumph for the remainder of the book.  While I'm not entirely in love with Angela Goethal's narration, it actually grew on me and I found myself wanting to listen to the audio instead of just stopping and reading from the print.  Of course, there were times where I DID have to stop and look to the Kindle book for spellings of names, as well as certain quotes that I wanted to highlight.

I don't know if it was the narration or the book itself, but Dark Triumph became easily devoured in a matter of hours, and I finished the entire book much earlier than I had anticipated.

But even as I write this review, I'm still a little conflicted.  Dark Triumph has a lot more emotional depth than Grave Mercy did.  Sybella is truly the NUN ASSASSIN I'd been looking forward to since the first time I'd heard the words "nun assassin" and learned about the His Fair Assassin series.  The death count in this book, by Sybella's hand, might even make up for the lack thereof by Ismae's hand.  If I thought Grave Mercy was quiet and tame, in comparison, Dark Triumph could be its opposite.

But honest, it's not.  Dark Triumph is certainly darker than its predecessor, as it details events that are bound to make a lot of people uncomfortable.  Just the list of all the secrets Sybella has been keeping is enough to last me for some time, though not all her secrets are dark ones.  But Dark Triumph isn't any more exciting or intriguing that Grave Mercy was.  Just the fact that we focus so much on Sybella's journey of self-revelation and her state of mind, and less on the events surrounding Anne's Duchy of Brittany, made the action in this second His Fair Assassin book quietly thought-provoking, even if not tamer.

It's hard for me to decide whether I liked one book more than the other.  It's like comparing apples to oranges.  Because even while both books follow a different girl, set in the same time-frame, with a lot of the same events surrounding them, they are definitely two very different stories.