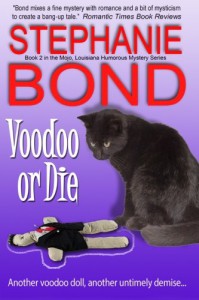 by Stephanie Bond
Book 2 (final) of Voodoo in Mojo

**This book was also published as Finding Your Mojo.

Q: Where to go when you've lost your mojo?
A: Baby, drive south.

When attorney Gloria Dalton arrives in the small town of Mojo, Louisiana, she's desperate for change.  Her past haunts her--at sixteen she was forced into the witness protection program and ripped away from Zane Riley, the boy she loved.  After years of heartbreak and hiding, she's hoping that this move will be her last, that she can make a life for herself among the quirky residents of Mojo.

But Gloria's optimism fades when a welcome gift turns out to be a voodoo doll and her male paralegal suffers a shocking death.  When the new Chief of Police arrives on the scene, Gloria's life takes another left turn--it's her first love, Zane, who doesn't recognize her behind her careful disguise.

Concealing her identity and her feelings for Zane is killing her, but when it's revealed that her employee was murdered and secrets begin to spill, Gloria realizes it's going to take a special kind of voodoo to keep her quest for her own personal mojo from hitting a "dead" end!

Really, while this book is categorized as a cozy, it actually presents more of a genre-of-all-types book, same as the first book in this duology.  It has a light, casual, comedic air to the story telling that reminds me of a cozy mystery, but the atmosphere will sometimes dip into the darkness that I typically associate with grittier crime thrillers.  Then it includes the steamy sexy times of category romance... while at the same time incorporating fluffy, sweet devices used in contemporary romances.

But whatever it is, the entire Voodoo doll scenario actually feels a little absent despite the fact that it is entirely present.  Why?  Because I didn't even think to write about the use of Voodoo in this review until right before scheduling this post to publish.  Granted, I know little about Voodoo, so I'm not one to make any noise about how it's represented.

The Voodoo doll is mentioned a lot, and we even have our resident expert on Voodoo cryptically explaining to us what might be going on.  But the for the most part, I feel like that aspect of this book is more in the background as a jumping board to tell the story rather than a huge part of said story.

If that makes any sense.

I felt that I really enjoyed this second, and final, installment of the Voodoo in Mojo duology more than the first book.  I don't really know if it was because the characters were more familiar, but I definitely DO think that it might have to do with our main couple being a bit easier to like--I've found that second-chance romances really DO have more heft to them in single-book romances than any other type, really...

But honestly, the romance wasn't all that made me like this book more than the first.  It could just be that the mystery and all the secrets, and surprising twists and reveals just seemed so crazy and outrageous that the entire book really appealed to me.  A lot of instances, the story really did keep me guessing.  And there certainly were a lot of mysteries to guess about.

Gloria was a great heroine to follow, and her relationship with Zane, though a little rushed at times, DID elicit a lot of sweetness to it.  There was even the obligatory angst that actually seemed quite in tune with all the conflicts between our main couple, considering Gloria's been leading a fake life and couldn't admit to Zane that she was the girl he loved when they were teenagers who suddenly disappeared one day and fell off the face of the earth.  There was bound to be angst at the resolution, and while I don't really like romantic angst all that much, I think this situation was handled very well.

On the other hand, some of the concluding scenes felt a bit rushed, but I'm not really complaining.  In fact, I'm thoroughly happy with the way everything wrapped up; although it COULD also be because I just really found enjoyment in this book. 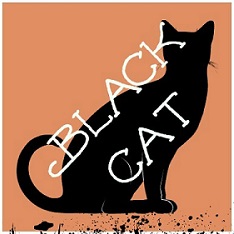