by Nora Roberts
Book 1 of The Cousins O'Dwyer trilogy

With indifferent parents, Iona Sheehan grew up craving devotion and acceptance.  From her maternal grandmother, she learned where to find both: a land of lush forests, dazzling lakes, and centuries-old legends.

County Mayo, to be exact.  Where her ancestors’ blood and magic have flowed through generations—and where her destiny awaits.

Iona arrives in Ireland with nothing but her Nan’s directions, an unfailingly optimistic attitude, and an innate talent with horses.  Not far from the luxurious castle where she is spending a week, she finds her cousins, Branna and Connor O’Dwyer.  And since family is family, they invite her into their home and their lives.

When Iona lands a job at the local stables, she meets the owner, Boyle McGrath.  Cowboy, pirate, wild tribal horseman, he’s three of her biggest fantasy weaknesses all in one big, bold package.

Iona realizes that here she can make a home for herself—and live her life as she wants, even if that means falling head over heels for Boyle.  But nothing is as it seems. An ancient evil has wound its way around Iona’s family tree and must be defeated.  Family and friends will fight with each other and for each other to keep the promise of hope—and love—alive...

I guess the thing that stood out to me the most was Iona's verbal diarrhea.  The moment she starts interacting with her long-unknown family, cousins Branna and Connor, she becomes a basket case of nerves and rambles until she stops making sense.  Then she apologizes for rambling and rambles some more.  Each new person she meets creates a new nervousness in her and she commences spewing whatever thoughts come to her mind.

Normally, this would be a very annoying trait--as I prefer a peaceful quietness, myself, much like Branna.  But for some reason, I found it kind of sweetly endearing from Iona.  And I don't know if it's just because of what she says, or how she says things... or just that it's a different type of personality than just being the clumsy, klutzy, sunshine girl-next-door.

Dark Witch is enjoyable.  I was certainly hooked.  The premise of this entire trilogy reads like a high fantasy at times, which was something I'd been kind of looking forward to.  But being that it's a contemporary setting, the language, the dialogue, and the sometimes overuse of flowery descriptors for just about everything made it a little hard to take the dangers of the O'Dwyer cousins' conflict seriously.  It was jarring, to say the least, and at times the narration felt rushed.

The characters are great, although they are also flawless in spite of their flaws... if that makes any sense.  Let's just say that, sometimes you come across a set of people who are so good and so noble that it kind of hurts your teeth.  It's not a bad thing, really.  But it also makes the presence of these people feel way too deliberate in each scene--it's as if the author wants you you know for sure that these people are all extremely special and significant, and even adds a bit more purple-y prose into their biographies for good measure.

Anyway, the story was good, but predictable.  And again, the premise is a great one.  All-in-all, Dark Witch is a great start to a trilogy.

If I had one big complaint--among others--it would be the unnecessary addition of the romantic angst.  I'm not entirely sure I understand what happened to make Boyle melt down about his relationship with Iona aside from the obligatory "Main hero with commitment issues" trope.  But it happened, it felt out of place, and Iona dealt with it nicely, I thought. 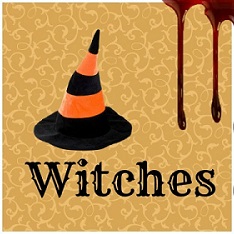