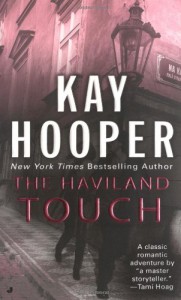 
Having read the entirety of Kay Hooper's Bishop/SCU series, I guess I was a little startled by the experience I had reading these older works, which were apparently part of the Harlequin Silhouette Intimates line.  Shorter than other books I've read by Kay Hooper, both Antiquities Hunters books were actually much more enjoyable and kind of refreshing.

The Haviland Touch and Enemy Mine both follow a romantic suspense/adventure story involving "treasure hunters," which really appealed to me.  I've always been interested in archaeology and find many a movie depicting this particular topic very fascinating.

Of course, like any other category romance, you tend to get more romance than you get of anything else.  Especially in this particular final installment of the Antiquities Hunters duology.  In fact, I almost felt a bit frustrated about the relationship between Drew and Spencer... though it didn't drive me crazy or anything.


The Story:
Spencer Wyatt's father has always been an admirer of unique artifacts and relics.  In fact, the biggest dream in his life has been to find and prove the existence of the Hapsburg cross that went missing in Austria hundreds of years ago.  But even as the years have gone by, Allan Wyatt still only has a pile of notes to show for his research.

After being laid up due to a stroke, doctors are telling Spencer that her father may not have much longer to live.  Determined to help her father realize his biggest dream, Spencer decides that she will head off to recover what he's been unable to find all these years.

But any kind of unique relic such as the Hapsburg cross attracts attention, sometimes of the unwanted, dangerous variety.  Spencer's father wants her to request the help of Drew Haviland, also a renown collector and antiquities hunter--with him accompanying her, she's sure to find the cross.

But a jilted betrayal from the past has left the relationship between Spencer and Drew kind of rocky.  The last thing Spencer wants is to ask the help of a man she walked away from and hurt ten years ago.  Drew, on the other hand, has just discovered that his bitter memories of Spencer's betrayal is less like what he'd always thought.


My Thoughts:
I suppose, to be fair, this book is first and foremost a romance.  You can kind of see it from within the first few chapters.  A first love, left to hang after one party leaves the other.  Spencer, being young and overwhelmed, runs away from Drew, breaking their engagement, and elopes with another man.  Drew, having been jilted so easily and quickly, can only form his own opinions as to why Spencer would do that and why.

And then, in present day, the two of them are still wallowing in the angst that is a broken first love.  To be totally honest, we've all read that same story time and time again.  And to be totally honest, while I understand the angry, upset, bitterness that Drew has harbored all these years... it HAS been ten years, and shouldn't he have moved on by now?  And even if not, I really don't like it when a person is threatened with unwelcome sexual harassment and intentions, no matter how upset you are with that person.  It just doesn't seem right.

Or was there a different interpretation for Drew's declaration of how he was promised something and he intends to get what he was promised?  That he would "take her" and show her what it's like to be "in thrall to someone else."  Am I reading too far into these innuendos?

So anyway, Drew came off a bit of an asshole in the beginning.

Of course, his bitterness doesn't last long and the angst is resolved almost before our two main characters even leave the country.  At the very least, I give kudos to Kay Hooper for not drawing out a misunderstanding and the romantic angst for too long, considering we have more pressing matters at hand that involve life and death.

Once the past is put behind them, Drew and Spencer actually exhibit a pretty good, if also gaggingly sweet and cheesy, partnership and romance.  I kind of like them more when they're working together to find the cross rather than making mooney eyes at each other.

I think I might be getting cranky in my old age.  But anyway...

The Haviland Touch was exciting and action-packed.  It was lots of fun to read and, with the exception of the "Drew is an asshole" episode at the beginning, the rest of the book is actually fairly enjoyable.  It just also felt a little unbalanced in the romance versus suspense allocations, but I'm willing to overlook that since I kind of expected it anyway.