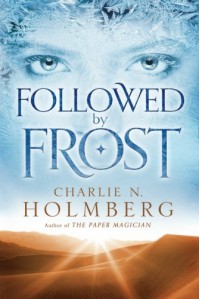 Followed by Frost had been a book I looked forward to since the moment I read its summary, as I AM a fan of fantasy and adventure and high fantasy. There was all sorts of potential for adventurous fun and anticipation to be had.

And also, while I’m not sure this is one, it had the feel of a possible fairytale retelling, or a folkloric tale with an inspiring lesson to be learned, I suppose.

Even so, I hadn’t quite expected the protagonist to start the story off with the personality that she presented (kind of bitchy with a self-proclaimed superiority complex) in the first two or three chapters, right before leaving her home on a destination-less journey. And I also hadn’t expected that the beginning of her tale would drag on in such a way that my mind would wander and miss some pertinent story building details or some much needed story progression.

Fortunately, this book DID get better as the story continued. When Smitha joins the Southlanders (and I finally accepted how quickly her personality made a one-eighty degree turn from one extreme to the other in so little time, which I attribute to having missed some of that pertinent story building and progression) the book becomes much more enjoyable and even drew me in fully.

And there might have been some feels involved at one point or another.


The Story:
Followed by Frost has a fairly basic Golden Rule message underlying its storyline--the usual “Treat others the way you want to be treated.” But in this case, it would be a more literal “Act the way you want to live”--have a cold heart, live in eternal coldness with frosts and storms following you everywhere. Literally.

Smitha Ronson is beautiful, prideful, and a fortunate child in her home. And she knows it. But when her own self-proclaimed superiority to others leads her to reject a man’s affections and marriage proposal in the harshest way, he lays a curse upon her--that frost will follow in her wake and everything she touches will freeze. It does not take long for Smitha to realize the extent and danger of her curse when water and food solidifies into icicle chunks before she can eat them and the touch of her skin forces others to pull away at its freezing burn.

Worse yet, snowy storm clouds follow her wherever she goes, leaving her surroundings in wintery climate for at least a mile surrounding her. Wherever Smitha goes, spring never comes, summer is taken away, and life is unable to survive in such conditions for long. With this, Smitha is cast away from her home with nowhere to go, hunted by other villages for her unnaturalness, chased off because of the winter she brings each area, and, strangely, followed by Death who is determined to coax her into his world to live with him as his Queen.


Some Thoughts:
As I had already stated, Followed by Frost had a rather slow beginning. One in which Smitha spends several chapters traveling by herself, being hunted by men and dogs who perceive her as evil, with only the companionship of an entity identifying as Death who is intrigued by her half-living state as a cursed woman. I know that a lot of this first part of her journey was significant to her growth--that it is actually here, living alone for such a long time that she begins to see her previous life in a new light.

But I feel like either all of that came on too suddenly, or I had glossed over it because, as I’d mentioned above, I couldn’t keep my attention from wandering away long enough to catch those important character developing details. In hindsight, I can see them now, especially after getting to a point nearing the end of the story and realizing how many years had passed since Smitha was still a spoiled, entitled brat and had been cursed for her behavior.

There were mentions here and there about a year passing during her aimless travel. And maybe even mention of another year passing at another point in the story. But the book sort of just went by in a blur until some more enjoyable story details presented and my attention wandered back to it.

Really, aside from that and the fact that it feels like Smitha’s personality did an extreme one-eighty turn in personality overnight--one second she’s that insufferable, entitled, rude little girl, the next second she’s a self-sacrificing martyr--I really don’t have many more complaints about this book.

I never had a problem with Smitha’s personality at the beginning of this book--she was rude and selfish and felt like she was superior to everyone else around her, even including her own mother and little sister. I was expecting a shit ton of character development to follow in the wake of her curse. I just hadn’t expected all of that development to happen without warning; and I’m kind of disappointed that it happened so fast that I had missed it altogether.


Some Last Thoughts:
Followed by Frost was written well with vivid imagery and great description of the lands, the culture, and the people. And the feel of Smitha’s wintry surroundings were done excellently--it might have helped that during the reading of this book, the weather in our city was quite chilly as well. The lonely darkness of her mental atmosphere had me feeling for her--for her desperate need to end her cursed suffering; for her regret at bringing this curse upon herself; for how much she missed the warmth of the sun or the touch of human contact; for the conflicting struggle between wanting to end it all and end the curse versus wanting to find a way to live and hope that she can find a place that will accept her; for the little things in life that we take for granted such as a warm meal, a hot bath, a comfortable set of clothes…

There really is a whole deal of thought-inspiring concepts scattered throughout the story. This book has the potential to be a lot of great things if you can get passed the slow build-up of the story and the slow going travels of Smitha’s one-person journey.

The characters were interesting and good, even if they weren’t really outstanding in anyway. Even Smitha seemed to fall short of standing out. The character of Death had a lot of potential, but he seemed sidelined in favor of the rest of the human characters, and especially Smitha’s love interest--who also didn’t really stand out much and felt like every other carbon-copy background hero. There was also the Southlander prince, who was underutilized, as were many of the other characters who make a big impact in Smitha’s life.

Then there was also some mentions of wizards and the lands where wizards could be found--that Smitha considered searching for a wizard like the man who had cursed her to see if someone could lift the curse.  But that line of thought sort of fizzled out and I'd forgotten about the existence of these wizards altogether.  They became like the outrageous stories the people in the book proclaimed them to be in the beginning--nothing but a myth.

Nonetheless, I still loved the developments in Smitha's story.

Ultimately, I liked this book enough to not be entirely bothered by the one or two negatives, even if they DID impact my ultimate rating of this book.