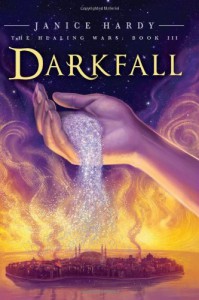 It took me three books to make a decision on what it is about this series that doesn't work for me. While this third book has a lot more action and a lot more forward progress and doesn't have a repeating story line like the first two books did, it was still a mediocre to MEH read for me. In fact, the entire world of The Healing Wars had quite the potential to become a great story, if only because there was a well-thought out story line and a decently created world with depth in culture and the people.

Unfortunately, the book read like a detached, unemotional screenplay that was waiting for the actors and the director to inject excitement and feeling and bring everything to life. The characters felt detached from what they were doing and they weren't in the least likable or relatable enough for me to forgive them for being lifeless character bios on paper. At least two significant deaths occurred, a war happened, more people died, and the younger sister is in terrible shape with brain damage and stuff... but I couldn't find a smidge of care in me to feel anything for these tragic happenings when I knew that I SHOULD at least feel SOMETHING.

While I will admit that I can be a cold and calculating bitch with no compassion, I do have human emotions (contrary to popular belief), and if written well to evoke those emotions in me to present themselves, I would at least manifest my own version of sadness, pity, anger, or happiness. But the entire series of The Healing Wars never brought any of this out. The only feeling I had was relief that the story was over.

Sincerely, however, I will say that the book was written well. It flowed, it progressed, and it got you from point A to point B without dilly-dallying too much on insignificant matters. This was how I was able to finish reading it, because the book wasn't terrible to read at all--it just didn't stand out, nor did I care for it.

Once again, I really would just give this book (and the entire series) a simple "MEH" rating. Not good, but not bad... just okay. I don't discourage people from reading it, but it wouldn't be one of the first books at the top of my list to recommend--especially for non-fantasy readers, or non-high fantasy fans (like my best friend who thinks that high fantasy novels are boring).

At the very least, I got a few answers to some of my questions and I've grown to accept the way the magic system works even if it still doesn't make sense. The world's magic logic has some gaping holes that I know will never get answered, but I can live with that. At least now I know that the people in this world do know how to use traditional means of healing--bandaging wounds, allowing cuts and bruises to heal on their own... and such--even though it is mentioned that the Healers see herbs and salves and such as an unorthodox form of healing and not "true healing", which is an interesting concept that I would have liked to see explored more if this story wasn't already long enough.

My biggest complaints are really for the characters; especially Nya. Honestly, sometimes I wish Nya would just shut-up and let the experts do the war planning. Because, just because she has saved the day more than once doesn't mean that she's very good at being diplomatic and when her rash tongue starts pissing off people she shouldn't be pissing off and ruining the bigger picture for the world, then she's just being childish and needs to go away and let the adults do the negotiating. Several times she would chime in with her own two-cents and I really just wanted her to go away and find something else to play with before she ruined more chances of survival by continually being too daft to realize that there is more to saving the world than just her powers and what she can do.

She got annoying really fast. So did her best friend Aylin. Aylin evoked some eye rolls from me because she just kept resurrecting old conflicts and old arguments about Nya's powers. She doesn't like that Nya uses her shifting powers to kill or torture. But, oh, it's alright if someone else came along and put a knife in the enemy's chest... because that's different than killing... with Nya's shifting powers? I just didn't understand that aspect of Aylin's repulsion over the way Nya used her powers. Because in the first book we've already established that, like it or not, there are certain ways that Nya can use her powers as a weapon and she need only learn how to use them properly.

I don't know why Aylin keeps bringing this up as a means to evoke argument.

Nya was written to be way too perfect as "The One" who will save the day. And honestly, she was the most complex character in the story if only because everyone else was so straight-forward and predictable that they became cardboard cut-outs in the background. There was just no life in these people.  They were all drones or lemmings, which conveniently allowed Nya to become the more ideal, more intelligent "leader" for these people.

Then again, I cared little for the characters, so it doesn't bother me all too much.

Simply put, The Healing Wars is a mediocre read that many people may enjoy. It's just not my cuppa.