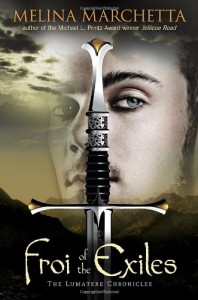 I wasn't going to write a review for these Lumatere books (though I DID think about writing a review for the series overall), but the book took me so long to read that I actually started formulating thoughts... of the non-positive persuasion.  And that's usually not so great.

Did I say in an earlier post that I loved the characters from Finnikin of the Rock?  Honestly, I don't know where that came from, but the more I read Froi of the Exiles the more I believed that I must have been bewitched or something.  I think I'm more neutral on these characters than in love or in hate with them.

In fact, I don't really have too many complaints about Froi of the Exiles or Finnikin of the Rock save for the characters.  The book was adventurous and fun; and I love adventures!

I liked the way the book was written and I liked the whole big curse theme with it's supernatural/mystical/magical elements and I liked the background of the world created for Lumatere.  And some of the dialogue isn't so bad either, witty and thoughtful.

But the characters make life so miserable (and yes, I DO understand that life is miserable for everyone in the story with power struggles and wars and fighting and killing and death and curses, but still...) because I get the feeling that everyone is going out of their ways to prove just how much suffering they all went through and who suffered more than so-and-so...  It's a world of people trying to one-up each other on their stories of misery.

I know that there was more going on than what I mentioned above, but this is what I ended up focusing on.

The only bright spots of happy in the entire series so far... well, there's Lady Beatriss's daughter Vestie.  And then there are Trippideaux (how to pronounce name...) and Grijio, De Lancey's children, who are actually kind of fun for their brief presence.

So, in the kingdom of Lumatere, instead of everyone playing nice and trying to work together to bring their kingdom back into a flourishing world... everyone's just being all prickly and mean and angry at each other.  I mean, I also take note of those behind-the-scenes moments that mention how people are working together to rebuild their kingdom... but then we emphasize on all the more hideous attitudes and behaviors from a group of people who feel like they've been wronged the most by this entire power struggle of the kingdoms.

And then in Charyn... well, THAT kingdom is kind of... arrogant and angry in its own way?  I don't know how to describe it.  I mean, do people really have nothing better to do than to condemn a young princess who has no control over her own life, has been targeted for death since she was a child, and just so happened to be the baby born when the big curse came into effect throughout the kingdom?  I mean, she was JUST a baby when the curse happened and it's NOT like she was the one who cast said curse.  And when she seems to be the only person with an answer to the resolution of the curse, everyone continues to treat her like an insane person as they ridicule her and verbally demean her routinely?

I don't see anyone else trying to figure out how to break the curse.

It's kind of sad.  Everyone's so pissed off.  Can't we all just get along?  Am I too naive, maybe?

And so, entertaining as this book/adventure was, it's pretty telling when I begin to put off reading the book at times.  But then when I DO pick it up and start reading it, I seem to fall right into the darn thing.

So... yeah...  I'm not even sure what to think about this book (or the first one, cause the same sort of ish happened while I was reading Finnikin).  I DID like this one a little bit better than Finnikin... if only by a slight margin.

And yes, I'm already beginning Quintana of Charyn... it's just my stubborn way of saying: "I looked forward to this series, and gosh darn, I'm going to finish it!"