Quick Thoughts: Silence for the Dead 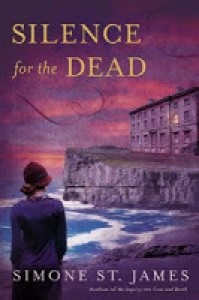 Silence for the Dead

In 1919, Kitty Weekes, pretty, resourceful, and on the run, falsifies her background to obtain a nursing position at Portis House, a remote hospital for soldiers left shell-shocked by the horrors of the Great War.  Hiding the shame of their mental instability in what was once a magnificent private estate, the patients suffer from nervous attacks and tormenting dreams.  But something more is going on at Portis House—its plaster is crumbling, its plumbing makes eerie noises, and strange breaths of cold waft through the empty rooms.  It’s known that the former occupants left abruptly, but where did they go?  And why do the patients all seem to share the same nightmare, one so horrific that they dare not speak of it?

Kitty finds a dangerous ally in Jack Yates, an inmate who may be a war hero, a madman… or maybe both.  But even as Kitty and Jack create a secret, intimate alliance to uncover the truth, disturbing revelations suggest the presence of powerful spectral forces.  And when a medical catastrophe leaves them even more isolated, they must battle the menace on their own, caught in the heart of a mystery that could destroy them both.

Silence for the Dead is one of those books that has a great premise and a gorgeous cover, and so you end up with some high expectations, especially knowing how well our author, Simone St. James, can write.  And it has all of this, but in the end, I felt like the book never reached it's full potential.  As much as I'm a weeny when it comes to ghost stories, I was really looking forward to this particular book because of the haunted hospital aspect.

But the book never truly got appropriately spooky, with maybe one or two scenes that came close, but didn't quite do it.  I had read this during the night and expected to fully be scared out of my wits, but even with the lights off, it didn't really do that much.

I will give the book props for touching upon the lack of medical and psychological treatment and care for the war heroes of WWI, the men who had come home with shell shock, and whom society were all unable to accept.  In fact, the story line involving the patients at Portis House seemed to be the stronger of the story tangents.  The way that these men were treated was the more horrifying of everything presented in this book, and even as you knew (and still know) how veterans of war were treated upon returning home with PTSD, it's still a shock to realize the extent of how terrible it all was.

Story-wise, it was a bit unfortunate that everything starts falling apart towards the end of the book.  The romance was also lacking some chemistry, and the men of Portis House ended up just fading into the ending.  Kitty's family issues were never truly resolved either, and her misgivings about men seemed dealt with too readily with the standard "love cures all" treatment.  The same could be said about Jake Yate's PTSD, wherein his fatalistic and suicidal desires were dissolved just because he met Kitty.

Still, I DID get hooked into the book, and the writing is still beautifully done.  The atmosphere created was a great attempt, and the book was still entertaining.  I DID still like Kitty and her gumption, though I found her lack of sense, thinking she could imitate a nurse without repercussions a bit irresponsible, though I appreciated her awareness that her actions could have gotten someone killed in the long run.

Another enjoyable book by Simone St. James, though not necessarily my favorite, and probably more disappointing just because of my own high expectations.