So I thought I'd be able to slide individual reviews for each of these books out as I read them, but after finishing Slightly Shady, I was under the impression that I had little to say about the book.  Lavinia was the standard Amanda Quick heroine, Tobias was the standard Amanda Quick hero... albeit he DOES tend to get on your nerves with a bit of his neanderthal, broody, overprotective behavior.  And he started off as a jackass altogether.

And upon finishing the rest of the series... well, while very enjoyable with all the usual Amanda Quick charm, there really wasn't anything altogether outstanding about this series.  Although I think this is probably one of the few Amanda Quick series wherein she follows the same main couple throughout, only introducing new characters on the side as the books progressed.  The only other one I recall was a duology, Whispering Springs.

The side characters were really only okay, as far as characterizations stand, though I will admit that I DID really like Priscilla in the last book, whereas she barely stood out in the first two as a very, very background character, friend to Lavinia's niece, Emeline.  I had my issues with Anthony and Emeline, and couldn't quite figure them out, so they made okay supporting characters as part of the Lake & March investigating team.

The mysteries, overall, were rather standard and predictable, especially the in the last book, Late for the Wedding.

But in the end, I was still rather entertained and enjoyed myself, so on a scale, this series gets an average rating from me.  Another enjoyable Amanda Quick series finished! 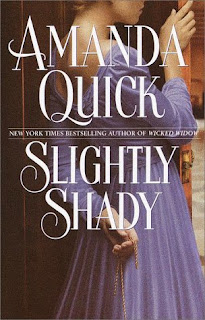 From the moment he burst into her antiquities shop in Rome, Lavinia Lake knew the stranger was nothing but trouble.  He said he was in pursuit of a killer.  He swore he was only trying to save her.  Yet no matter what he claimed, Lavinia was convinced that Mr. Tobias March was bent instead on destroying her.  And when the self-described spy hustled her and her niece out of the shop and back to England, Lavinia could only hope that one day she would would find a way to repay Mr. March in full.

But Lavinia never imagined the shocking circumstances under which they would meet again ... or that soon he would become more deadly — and more compelling — with each passing day.

In the business of making private inquiries, Tobias March had been hired to trade down a powerful villain who even now was intent on assuming control of a vast criminal organization.  Yet in his search he had found nothing but one dead end — and one dead body — after another.

And then, just as his investigation was heating up once more, he found his mission and his life complicated by the most ungovernable, unpredictable, exasperating woman he had ever met.

Faced with a tangled web of deceit and danger, Tobias had no choice but to form a partnership with Lavinia, a lady whose past could only be described as slightly shady.  Yet when he persuaded her to become his associate, neither Tobias nor Lavinia realized that their heated disputes would spark a sizzling desire — or that the deeper they kept digging for the truth, the deeper they were digging their own graves.... 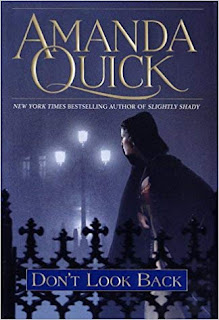 As if a head for business and a nose for trouble aren’t enough to distinguish fiercely independent Lavinia Lake from the other women of London’s fashionable Claremont Lane, there is one more feature to set her apart.  Lavinia is also well versed in the practice of mesmerism, an extraordinary gift that far surpasses mere charm and physical appeal.  Nobody knows this better than the usually cool-headed Tobias March, who seems to have fallen hopelessly under her spell.

Fortunately for all, however, Lavinia uses her powers for good.  And ever since a tragedy involving one of her subjects, she has even retired them in favor of her work with Lake and March, a joint venture providing “discreet private inquiries for individuals of quality.”

Celeste Hudson, the stunningly beautiful young wife of a family friend and fellow mesmerist, would surely count herself among such individuals--were she still alive, that is.  While mythology’s Medusa could turn men to stone, lovely Celeste was more accustomed to turning them to jelly.  In fact, unbeknownst to her husband, Howard, the ambitious Celeste was planning to use her talents to forge a new future in Society--one that would not include him.  Sadly, her plans were cut short when she was murdered.  Only a gentleman’s cravat wound around her lovely neck remained for evidence--small compensation for the strange and priceless bracelet that may have been snatched from her wrist as she drew her last breath.

As a result, Lake and March are soon in Howard Hudson’s employ on the trail of the killer.  But Tobias is convinced the dashing widower is more interested in tracking down the missing relic.  If so, Howard is not alone.  Any number of ruthless types are after the very same antiquity, whose centerpiece is an unusual blue cameo of inestimable value and supposed legendary powers--powers of immeasurable worth to anyone in Howard’s line of work.

Together, Lake and March undertake a tantalizing investigation that leads them from the glittering ballrooms of the ton to London’s seediest taverns to a mesmerist whose therapies include treating ladies suffering from “hysteria” is a a most unconventional method--and, not least of all, to the darkest reaches of men’s psyches.  Along the way, Don’t Look Back becomes a completely mesmerizing read as the irrepressible Lavinia and Tobias mix business with pleasure.... 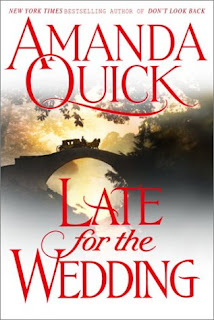 An invitation to a country house party at Beaumont Castle provides a perfect solution to Tobias and Lavinia’s most exasperating challenge: how to escape the chaos of London for a remote, relaxing--and above all romantic--retreat from prying eyes and wagging tongues.  But the lovers’ plans are foiled when their first cozy interlude of the weekend is disrupted by the appearance of a stunning woman from Tobias’s past.  Aspasia Gray’s beauty is as haunting as her connection to Tobias.  Her long-deceased fiancé was a friend of his--in addition to being an eccentric assassin.  The mysterious nature of the bond between Tobias and Aspasia makes Lavinia more than a little uncomfortable.  Especially as her first encounter with Aspasia occurs when she finds her in Tobias’s bedchamber...

It seems Aspasia is seeking protection--and solace--after receiving an ominous message that eerily recalls the past.  Suddenly the obstacles standing between Tobias and Lavinia appear greater than just a little London gossip--and far more deadly.  When events at the castle suggest someone is imitating the dead killer’s methods, the team of Lake and March fervently pursue the investigation--and each other--as their leads take them from Society’s most elegant haunts--and most discreet hideaways--to London’s shadiest backstreets.  As their relationship heats up, so does the intrigue.  Soon Lavinia will have to employ all her talents to flummox the scoundrel who so rudely interrupted her rendezvous.  And then she and Tobias can get back to more pleasurable affairs.
Source: http://anicheungbookabyss.blogspot.com/2019/04/series-thoughts-lake-march.html
series Amanda Quick adult review Slightly Shady Late for the Wedding Dont Look Back 2019 posts bl snakes and ladders 2019-april posts lake and march