Thoughts: A Most Extraordinary Pursuit 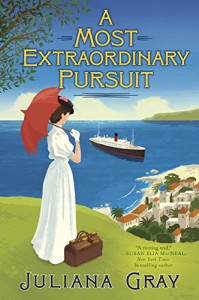 A Most Extraordinary Pursuit

February, 1906.  As the personal secretary of the recently departed Duke of Olympia—and a woman of scrupulous character—Miss Emmeline Rose Truelove never expected her duties to involve steaming through the Mediterranean on a private yacht, under the prodigal eye of one Lord Silverton, the most charmingly corrupt bachelor in London.  But here they are, improperly bound on a quest to find the duke’s enigmatic heir, current whereabouts unknown.

An expert on anachronisms, Maximilian Haywood was last seen at an archaeological dig on the island of Crete.  And from the moment Truelove and Silverton disembark, they are met with incidents of a suspicious nature: a ransacked flat, a murdered government employee, an assassination attempt.  As they travel from port to port on Max’s trail, piecing together the strange events of the days before his disappearance, Truelove will discover the folly of her misconceptions—about the whims of the heart, the motives of men, and the nature of time itself…

This book started out with a pretty confusing, yet amusing anecdote involving our heroine and a conversation she has with a deceased sovereign who is supposedly a figment of her imagination.  In truth, the writing is pretty good, and the story was easy to get into.  I just wasn't sure what the heck that first chapter was all about... and subsequent chapters that featured our heroine talking to the specter of people who are deceased, her father included.  This particular quirk of the book (or of our heroine's character, maybe) seemed like maybe a strange way for her to sort out her thoughts, but it was never really clarified whether these were truly facets of her own overactive imagination (of which she never appears to have in other instances), or if there's something more paranormal going on, such as maybe she's being haunted by the late Queen Victoria and her father.

In fact, this whole book was actually a bit confusing when it came to the story line.  Aside from the main plot of trying to find the missing heir of the now deceased Duke of Olympia, there was also the myth of Ariadne, Theseus, and the Minotaur... as well as what seems like an odd time travel insertion.

The book starts off with a prologue in 2012 to establish a sort of time travel-like premise.  But when we get to Emmeline's narration in 1906, there really isn't any indication that that prologue held much significance, except maybe some mentions of anachronistic findings in a ruin being excavated in Crete.  The time travel plot device isn't even brought about again until closer to the ending of the book, and a lot of other fantastical happenings occur that make me even more confused as to what's going on... but in a way kind of curious to see if things are explained better in the next book.

Meanwhile, I had a hard time liking any of the characters in this book.

While Emmeline comes off rather strong and independent, she's also kind of a play on contradicting ideals.  She's the personal secretary for the Duke of Olympia and prides herself in being able to take care of herself, but she openly admits to not seeing the advantages in gaining votes for women, with a simple, "politics are too complicated."  This rubbed me the wrong way, obviously, but I was amused to find out Lord Silverton was much more forward-thinking, treating Emmeline much the same way he would treat any other male colleague during those times--he pretty much trusted her to watch her own back as well as his, and didn't try to downplay anything serious or horrendous in deference to misconceived fragile sensibilities.

To be frank, I found I wasn't too sure how to take Emmeline's personality.  She was extremely prudish, and stubborn to the point of frustration, bordering on TSTL with her penchant for making extremely bad decisions and putting herself into danger twice despite having some sort of forewarning.  She's also extremely judgmental towards Lord Silverton (not without reason), as well as any of the other women who just so happen to find Lord Silverton charming (without reason).  Her world felt so black and white it started grating on my nerves.

But then you start seeing little flashes of her history, some that contribute to characterization and some that don't, and as the book progresses, it feels like she just starts growing on you.  And you hope that at some point in the future, maybe she WILL concede the benefits of the women's' vote, or maybe she WILL learn to stop being so prim, proper, and judge-y.

It's hard to grasp the kind of person that Emmeline Truelove truly is, but at the same time, I can't seem to really fault her for her rigid ideals and morals, simply based on what I started learning about her as the book progressed.

Still, this book could have been pretty good, strange mystery-not-mystery not-withstanding.  The action was nonstop from the beginning, and the strange little anecdotes were hard to figure out.  But the writing was rather good, and the bantering dialogue between Silverton and Emmeline was super fun.

I just wished that I was more intuitive to what the heck was going on for the first half of this book.