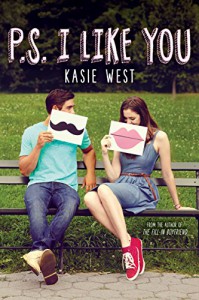 While spacing out in chemistry class, Lily scribbles some of her favorite song lyrics onto her desk.  The next day, she finds that someone has continued the lyrics on the desk and added a message to her.  Intrigue!

Soon, Lily and her anonymous pen pal are exchanging full-on letters—sharing secrets, recommending bands, and opening up to each other. Lily realizes she’s kind of falling for this letter writer.  Only, who is he?  As Lily attempts to unravel the mystery and juggle school, friends, crushes, and her crazy family, she discovers that matters of the heart can’t always be spelled out…

Okay.  So here are my thoughts:

I really, really, really enjoyed reading this book.  In fact, I'm actually quite pleasantly surprised by how much I enjoyed this book.  To be honest, the past two Kasie West books I've read have been a little deflated, and a little bit of a step down from what I'd associated with Kasie West based on the first two books I'd read of hers: Pivot Point and The Distance Between Us.  Up to last year, The Distance Between Us was my favorite of the Kasie West books currently published.

The rest of the books I've read since The Distance Between Us have been enjoyable, but just never on that same level of squee-worthy love.

I'm not the type to go hardcore fangirl too often.  Okay, maybe I am.  But I often see a lot of reviewers tout a recent release by a favorite author as "the best of so-and-so's work," and I often wonder if that's not too exaggerated.  I mean, maybe you love it that much because it's new and older works are a distant memory, you know.  Then again, everyone has their own preferences, and I can understand why people would make such an absolute declaration.

Because I'm probably about to do the same... or at least something similar here.

Kasie West is an author I follow and love.  She may not be an all-time favorite, but I do, absolutely enjoy the wit and humor she infuses into her books, when that particular quality is present.  I'm not going to lie:  On the Fence and The Fill-In Boyfriend were two enjoyable books on a superficial level; but both books seemed to lack that dry sarcasm and nonsensical, charming appeal that I'd long ago associated with Kasie West based on her first two works, Pivot Point and The Distance Between Us.

It had actually been because of the Pivot Point and The Distance Between Us combo that had me automatically dishing out more money than was necessary for each following Kasie West book.  But with two not-as-squee-worthy books in a row bought, I ended up a little hesitant of West's work.

So instead of automatically buying and jumping into the next of her books (this one), I put myself on a hold request wait list for a library copy.  And now I'm a bit conflicted, but with P.S. I Like You, everything that I loved about Kasie West has returned... and now I need to decide whether it'd be worth it to spend ten dollars on my own Kindle copy to add to my Kasie West collection.

Because, to date, I am fairly certain that P.S. I Like You is my favorite of all the Kasie West books written.

Quirky characters, quirky main character, quirky friendships, quirky family... a sweet, fun, and cute little love story...  P.S. I Like You was so enjoyable that I found myself finishing the darn thing before I realized that I should probably get some sleep.

I wish I could talk about who Lily's mystery pen pal is, but I don't know if that would end up being a big spoiler.  I'm not sure if the identity of this guy is meant to be a secret or not, because honestly, the moment he's introduced in the book, I already figured out how the entire story would go down.

And you'd think that, with the predictability, it would take away from my enjoyment of this story.  Instead, the way in which the story was presented, coupled with all the wonderfully created characters, and the awesome character interactions made the journey from beginning until the end very, very enjoyable.  The moment that Lily discovers who her mysterious pen pal is and the new conflict happens was wonderfully presented; all the new interactions between Lily and mystery pen pal were sweet and sweet and so darn sweet.

I really wish I could talk about Lily's mystery pen pal without spoiler tags, if only because he's present from the start and I want to talk about his development.  Because I loved how West played up their relationship.  Then again, like I said, it's quite obvious from the way he's written in who the main love interest is--it's a Kasie West book after all, and all the signs are there.

There are quibbles, of course.  I had my doubts about the love story in the beginning, but I'm actually quite okay with how everything worked out.  And I had a slight problem with how the ending dragged out.  And I think that the entire book could have done without the whole "Mean Girls" angle--it felt highly unnecessary.

But then you have best friends who squee at creating a morning routine tradition, an older sister who keeps walking in on you talking to yourself, a crazy family who is more likely to scare away new acquaintances just by being their normal selves, and a pet rabbit who pees on your blind date's sock...

On a side note, aside from the passion for song-writing, and the whole getting-a-boyfriend thing, I can totally related with almost everything else in Lily's life.  Lily's socially awkward, introvert personality was essentially me during my teens.  Lily's tendency to be more eloquent on paper as opposed to in-person is so similar to how I've always been my entire life.  Even down to her off-trend sense of fashion and her dislike for P.E.

I just really, really enjoyed this book.  And I truly hope that the next Kasie West book will be just as excellent!