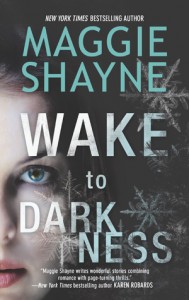 by Maggie Shayne
Book 2 of Brown and de Luca

Stranded with a murderer...

Rachel de Luca's uncanny sense of perception is the key to her success as a self-help celebrity.  Even before she regained her sight, she had a gift for seeing people's most carefully hidden secrets.  But the secret she shares with Detective Mason Brown is one she has promised to keep.  As for Mason, he sees Rachel more clearly than she'd like to admit...

After a single night of adrenaline-fueled passion, they have agreed to keep their distance—until a string of murders brings them together again.  Mason thinks that he can protect everyone he loves, including Rachel, by taking them to a winter hideaway, but danger follows them up the mountain.

As guests disappear from the snowbound resort, the race to find the murderer intensifies.  Rachel knows she's a target.  Will acknowledging her feelings for Mason destroy her...or save them both and stop a killer?

Wake to Darkness definitely has more suspense than the first book in this series, as well as a very intriguing murder mystery to go with it.  Sleep with the Lights On was all kinds of creepy and exciting and fun; but if I'm honest with myself, I really DID enjoy this second book a little bit more than the first.  And I wonder if it has anything to do with the fact that we already know our protagonists and have a grasp on the kind of characters they are.

This Brown and de Luca series is just the right amount of series-format plus stand-alone installments to keep a reader hooked, while at the same time giving us new material to enjoy per each book.

Wake to Darkness employs one of my more favorite plot devices, as the blurb states, stranding our heroes on a mountain in the dead of a wintery snow storm.  Of course, I hadn't quite expected the Snowbound device to be executed the way it had been presented, and unfortunately, I didn't take to it as well as I would have in other cases.  I'm not entirely sure I'm a hundred percent behind the fact that Mason chooses to take his entire family on a vacation when there's a killer out there hunting them--and to bring them to a resort where there are lots of other people, innocently trying to enjoy their own holiday vacation as well...

Of course, setting that little quibble aside, the rest of the book was fueled with suspense and that same eerie intrigue that comes with an exciting murder mystery and more of Rachel's "woo-woo" paranormal stuff.  The fact that we put a new spin on the organ donation angle carried over from the first book made for a great premise to follow:

Rather than Mason's brother killing from the grave using the evil within his donated organs (which I'm still a little iffy about THAT particular concept, with the "cellular consciousness" thing also carrying an evil gene, or something like that), the recipients of the donated organs, instead, are the murder victims as someone is running around hunting and removing said organs.  Instead of seeing the murders take place from the eyes of the murderer, Rachel's connection to the organ donation recipients forces her mind into the bodies of these people as they are being murdered.

The creepy factor is WAY up there this time!  O.o

And you know what?  I really DO appreciate how both books are stand alone mysteries, and yet the premises come together in the bigger picture of the long run.  It makes me wonder how the rest of the books in the series will give us newer, fresher cases to follow while at the same time referring excellently back to actions and events from the previous books.

As I did for the first book and the novella, I immensely loved Rachel and all the characters, some more than others and some less than others.  Rachel and Mason make a great team as partners in investigation, with Mason's police detective skills and Rachel's "uncanny sense of perception" that she had developed during her twenty years of being blind.  I DO love Rachel's sense of sarcasm, although I feel like she got a bit exhausting with some of her "Inner Bitch to Self" conversations inside her head--it was cute the first few times, but after a while it started getting a little old.  Nonetheless, I still loved following her narration a lot.

The romance was not as satisfying as I would have liked, if only because our main couple are great together as an investigating partnership, but have yet to really exhibit any kind of emotional or physical chemistry despite the blazing lust generating off of the two in spades.  I just can't seem to connect the romance, and I find the sudden inner monologue declarations of love a little premature.  Their chemistry was better in this second book, but still not to the level I would have liked, so I'm hoping to see more from them in the romance arena in the next book since they all but declared themselves to each other, even if not in so many words.

Of course, there still wasn't a clear conclusion to the romance by the end of the book.

Finally, the last thing I wanted to mention was the murder mystery, because I really DID enjoy this one and loved the premise to death.  A serial killer taking out all the recipients of Eric Brown's donated organs?  My only spoiler sport attitude about that was: How did the killer know which victims to target, because all of this information should be of the utmost confidential kind?  Even the police had to go through a lot of red tape and paperwork just to get an okay to view that information.

Otherwise, it was definitely an intriguing premise, even if not executed in the best of ways.

I kind of figured out who the killer was after Rachel was attacked the first time.  It was kind of a given and made the most sense to me, even if it didn't really.  If that makes any sense to anyone else at all.

Wake to Darkness was lots of fun and excitement.  And then there was also Myrtle, the blind bulldog Rachel adopted from the first book--such an adorable and awesome little mascot for these books!