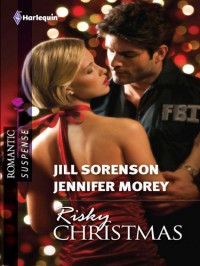 This dual-story anthology has some good points and some bad points.

Holiday Secrets got better as the story progressed, with a typical Romantic Suspense plot and the usual instalust/instalove romance device. But it's still not much to write home about. I'd say that this is not Jill Sorenson's best work as I have immensely enjoyed the two Aftershock novels of hers. Obviously it's a little harder to pack too much development into a short novella, and the entire story came to a close before I even realized it was there.

Kidnapped At Christmas was a more fleshed out plot with a better romantic development, but a somewhat scattered narration. And also we have a TSTL heroine, and so it lost some points. But overall, it was attention-hooking and entertaining in its own way. Still, it was a fairly mediocre read as a Romantic Suspense and also, I feel like Chloe talks too much and spends too much time telling us things we can deduce on our own. Also, the romance was a little wonky to stand behind.

Overall, this makes for an okay Christmastime read.