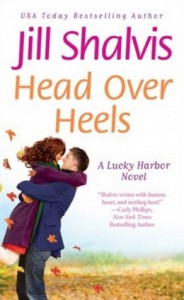 Head Over Heels is definitely my favorite of the first three Lucky Harbor books. I had been looking forward to this book for a few reasons, one of them a bit shallow, but what are ya gonna do?

First of all, I was the most interested in reading about Chloe since she was first introduced in Simply Irresistible. She just seemed so much more complex than the other two sisters, but probably moreso because she’s the less standard type of Romance novel heroine I have typically seen reading a lot of contemporary romances. Second, we will have seen much more interaction and have a bit more backstory on Chloe and Sawyer by the time their love story rolls around (unlike Maddie and Jax’s instalust to instalove story). And as much as second chance romances are more believable in the relationship developing arena (for Tara and Ford’s love story), I sometimes also like to see a developing romance in progress without pre-storyline emotional ties being an issue.

Finally, Sawyer is Lucky Harbor’s town Sheriff--and I like men in uniform with hero-style jobs. Yes, this is my shallow reason for being more interested in this book.

Romance-wise, the romance between Chloe and Sawyer is extremely sweet and cute, very wonderfully developed over the course of the book. With a case of opposites attracting, a straight-laced sheriff and a free-spirited “wild child”, the two seemed to be meant for each other. But in regard to what actually occurs in Head Over Heels these two have earned their Happily Ever After™.


The Story:
Chloe is the free-spirited “wild child” with a penchant for wanderlust and, according to the Lucky Harbor Facebook newsreel, a knack for getting into trouble. Of course, we get to see over the course of the book that Chloe’s trouble-making life in Lucky Harbor borders more on a Robin Hood-like vigilantism than actually just getting in trouble for the sake of getting into trouble. But for the past six months that she has been living in Lucky Harbor with her newly found half-sisters, Chloe has finally found a place she feels like she’d love to call “Home.” And to be able to call someplace home, she’s slowly started to show her sisters that she, too, would be able to settle and whittle down her wanderlust ways.

But Chloe is far from wanting to change her free-spirited personality.

Meanwhile she has drawn the attention of town Sheriff, Sawyer Thompson, who is somehow determined to save her when she’s in distress, or keep her out of trouble as much as possible. In turn, Sawyer’s altruistic nature and hero complex has also drawn Chloe’s attention as well.

In other Lucky Harbor news, there’s a new Cute Guy in town who is now the center of our Lucky Harbor gossip crew’s attention; two of our three half-sisters are currently engaged with one sister’s wedding pending; and some intrigue may be afoot in the more secluded wooded areas around Lucky Harbor.


My Thoughts:
To be totally honest, once again it is my love for the characters of Lucky Harbor that keeps me so hooked on these books, and the fun, crazy humor in the narration. Chloe and Sawyer’s love story isn’t all that unique even with a much more non-standard heroine as Chloe. And to be totally honest, without the wonderful bantering between these two, they’re courtship (if you could call it that) might have been kind of bland since they spend more time than not either having “Moments” together or trying to seduce each other.

And then you get some mundane, side tangent stuff such as a look at the everyday happenings of Lucky Harbor town sheriff and what he has to deal with on a regular basis; which is great, but almost too mundane to be of significance. Granted, it shows you more insight into Sawyer’s personality and his day-to-day life, but it’s not really all that exciting even if some of the events are newsworthy.

On the other hand, Chloe’s self-development was actually quite interesting to follow as she goes from traveling all over the place and being without roots, to finding a place she could see herself settling down into, if only her sisters and the people of Lucky Harbor would give her a chance. And the heart of the matter is, you also get to see the thought process in Chloe’s mind, wrought out from years of growing up following her equally wanderlust-y mother and having no real place to truly call “Home”. I also think it’s great that, even in her process of finding a group of people to belong to, she doesn’t completely banish her free-spirited attitude towards life.

Again, Chloe is the much more complex of the three sisters, which is probably why I loved her book so much more than the first two, even if I had a blast reading all three of them.

The romance developing between Chloe and Sawyer, though not all that unique, stands out in their interactions with each other. After professing their attraction and their interests to each other, they actually spend more time trying to be in each other’s presence as much as they can manage. And they spend a lot of their developing friends-with-benefits relationship building a rapport, learning about each other, and in general, trying to take care of each other in their own little ways.

Sawyer may be a commanding caveman at moments, but with Chloe, I love how he’s so sweet and thoughtful, especially during those times when she needs someone to lean on the most. And during sex, I’m absolutely thrilled that an asthma attack doesn’t completely scare him off and instead, he goes and learns how to best give Chloe pleasure without putting her in the hospital since Chloe has admitted that she cannot have sex without straining her asthma and ending up in the ER. If that doesn’t scream “sweet” for the Lucky Harbor sheriff, I don’t know what does.

The sexy times in this book were probably much steamier and hotter for that fact, even if they were already kind of hot and steamy by their own merit.

The romance between Chloe and Sawyer is so much fun to follow, and as I love Head Over Heels more than the first two books, I also love this couple more than the first two as well. As I already stated, despite the implied “Meant for each other” vibe that the whole polar opposites attracting plot device gives off, I’m satisfied to say that the love the between these two was actually developed and outlined really well. They got their Happily Ever After™ because they earned it--not that other couples don’t deserve theirs as well, but we actually get to see the relationship slowly develop from mutual attraction and lust, to friendship, and then finally a much more caring and deeper love for one another.


Final Side Thoughts:
I have every intention of continuing into the rest of the Lucky Harbor series. The writing is witty and fun with a great dose of humor infused. If the character interactions are going to continue in the same vein as what I’ve come to love in the first three books so far, then I know I’ll enjoy the rest of the books. Certainly, it will be hard to replicate the awkward, yet tightly-knit, sweet and loving continued development between the three half-sisters, but I’m holding out that we’ll still get to see a bit of them here and there throughout the rest of the series.

And skipping forward to peruse the summary blurbs of the rest of the Lucky Harbor works, I’m pleasantly surprised to see a return to Chloe and Sawyer in a side novella--although it does happen to be listed as Lucky Harbor #12.5. Nine more novels and another short story and another novella to go before we come back to my favorite Lucky Harbor couple...