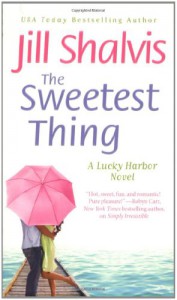 It's safe to say that The Sweetest Thing is much like my impression of it's preceding book, Simply Irresistible. It's formulaic as a typical love story with an overused plot device.

HOWEVER, that is where my complaints stop, honestly. Because sometimes you just need something lighthearted and fluffy to make your day, and, so far, the books of Lucky Harbor seem to fit this definition very well. Much like Simply Irresistible, The Sweetest Thing is fun and enjoyable, with a lot of strange, nonsensical humor and some laugh-out-loud moments. It's sexy in its own way (even if the sex wasn't really all that hot to write home about), and it touches the heart in just the right places.

The continuation of the three half-sisters in getting to know each other and the continuation of their new lives in Lucky Harbor is a treat. I may have liked The Sweetest Thing a bit more than Simply Irresistible if only because the love story was slightly more in-depth. And also, there was a lot more bonding going on between the three sisters, something that I had wished we could have seen more of in the first book. So I'm glad we're seeing more of it in this second book and I'm hoping to see more still, in the third book.

I might have had some feels at some point thanks to the three of them.


The Story:
Picking up from where the first book left off, Tara Daniels has chosen to stay in Lucky Harbor to help her sisters revive their mother's dilapidated, rundown dockside inn. A lot of renovations and rebuilding are in progress and the small, cozy business will be seeing it's grand opening soon. And, of course, Tara is at a crossroads in her life (as are all Contemporary Romance heroines), not quite sure whether to remain in Lucky Harbor with her sisters after all is said and done, or run away back to Texas where she'd been raised most of her life and do... whatever.

Tara's life is kind of out of sorts after her recent divorce and inheriting her mother's inn with her two half-sisters. But things are only going to become more complicated still. Her old childhood first love, Ford Walker is doing whatever he can to get back into her good graces (as well as into her bed), and after what had happened between them seventeen years ago, Tara's not sure if she can withstand another round of deep passion followed by disappointment and heartbreak. After all, it's not like Ford wants the same things she wants for her life.

To make matters even more interesting, Logan Perrish, Tara's ex-husband, shows up in Lucky Harbor determined to reconnect with Tara and make their marriage a thing once again.

Meanwhile, youngest sister Chloe is still on her wild streak, Maddie and Jax (from Simply Irresistible) are in the honeymoon phase of their relationship (as they disappear at odd moments to consummate like bunnies), Lucille the town gossip is running a Facebook poll on which man will win Tara's heart, and a seventeen year old girl arrives in Lucky Harbor set on learning about her origins. There might have been a lot of male posturing, wet t-shirts on boats, some sailing, and maybe a washboard abs contest in a bar as well.


My Thoughts:
To be frank, a lot of things happen in this book, even if not all of it significant. It almost feels like the next ten episodes in a story arc of a long running mini-series sitcom, or something like that. New characters are introduced vaguely and the next big coupling pair starts up a probable relationship with sexual tension and everything by the time the end of the book rolls around (hint: it's Chloe and Sawyer, and I've been most looking forward to their book since day one, Head Over Heels).

But the story line itself is nothing unique: A set of young lovers were wild and passionate during their teens, but had a bumpy First Love story, ending in heartache and separation. Years later, the powers that be give them a second chance by bringing the two back together for whatever reason, but both parties have their own reserves about getting too close lest they be burned once again, but they just can't seem to keep their hands off of each other.

Of course, to complicate matters, let's throw the ex into the little mess that's already complicated enough (even if the mess really didn't need to be complicated in the first place, but what do I know about relationships?).

What makes The Sweetest Thing so much more than just a typical love story, however, are really the characters and all of their interactions, relationships, and bonds with one another. I simply love the developing care and love between the three half-sisters, Tara, Maddie, and Chloe--how they've started to take care of each other in subtle ways, but how they also bond in a straight-forward, harsh-love type of way. They say what they feel, they get mean if they have to, and they're not afraid to dish out jokes or make each other's lives miserable so long as they maintain their biggest goal: Getting to know each other better as sisters and surviving each other together.

In and around the sisters are other great friendships and relationships to be had as well. Jax, Ford, and Sawyer are as good as brothers. Lucille and other of the elderly women are like mother hens and an extensive and over-imaginative gossip network. Everyone in the town of Lucky Harbor are good people without an evil bone in their bodies. Even if they side with certain people on certain matters, they don't do it by rolling over other people.

Again, sometimes you just need a light, fluffy romance with a heart-warming setting to make your day. Because even while The Sweetest Thing isn't the most unique story line in the world, just the character interactions make me all grinning and fuzzy and smiley and awe-ing. It's a pretty great feeling all with a Happily Ever After™ tying everything together.

Also, a lot of Tara's little quips and quotes are pretty awesome. And there's nothing wrong with some weird situations that just make you gape a bit or give a hearty little "Ha!" at how well it tickles your funny bone.

Chloe came up behind them. "Hey, thought we were doing yoga this morning."

"I get enough exercise just pushing my luck," Tara said, still watching the houseboat through the binoculars.

"Change is good but dollars are better."

The inn's first real guests arrived as scheduled [...] Maddie and Tara checked them in together, and Chloe gave them a gift basket full of her natural products. The wife fingered through the items, cooing at the bath salts, the herbal teas, the...

"Massage oil?" the woman asked, lifting the bottle. She had to slip her glasses on to read the label, "Edible strawberry massage oil," she said out loud. "Perfect for that special someone. Put it on your--Oh my."

Tara looked at Chloe in horror.

Chloe laughed and reached for the oil. "Whoops, I was wondering where that went. Here, try this instead." And she quickly replaced the oil with body lotion.

"Oh," the woman said, sounding greatly disappointed. "Could I maybe have both?"

"Well, sure." Chloe handed back over the oil. "Enjoy."

Mia giggled [...] and then Maddie snorted. She slapped her hands over her mouth, but it was too late, and the sound of it sent Mia into a new fit of laughter. Chloe promptly lost the battle as well.

"It isn't funny," Tara protested. "They're going to be up there doing... things." But her daughter was still cracking up, and Tara felt the helpless smile tug at the corners of her own mouth at the sound of it, and the next thing she knew, they'd all slid down the wall to the floor laughing like loons.