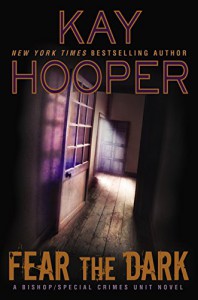 This most recent installment of Kay Hooper's Bishop/SCU series was actually a fairly weak one compared to a lot of the earlier books in the series. In fact, with the exception of a few factors or story events that still made the books enjoyable to me, the past few books in the series have been slightly disappointing, if only because they don't seem to have that intense excitement that a crime thriller should have.

As was typical of the last three (maybe even the last six) Bishop/SCU books I read, there has been a lot of repetitive discussions, monologues, and a lot of text book style back history being given within each book. It got tedious after a while.

What I will say about these books, however, is that at least the crime/murder mystery aspect is written well. I almost never figure out the few secrets or the ultimate culprit; except that oftentimes there is either a "Universal Evil" who is controlling a known suspect, or the mysterious perpetrator's identity comes out of left field in that way that couldn't have been figured out by readers at all, if only because there had never been a thorough enough investigative process presented, or no suspects had been mentioned before, period.

It really DOES take the fun out of murder mysteries when there was never any way of being able to play detective along with the characters.

Another aspect I'd been becoming a little disappointed in is that the romances have become non-existent if even there at all. Granted, a good book does NOT require a love story within the story's scope to be a good book or to be enjoyable. But I went into this series with the impression that it was filed into the Romantic Suspense category, so it becomes slightly disappointing to me (who has become quite fond of that genre) that the series is slowly diverging from that category into more of a Paranormal Crime Thriller than anything else. The romances are still there, but so subtle that they may as well NOT be there at all.

Which pretty much just means I need to shift my approach to reading new installments in this series if I want to continue enjoying them.

Overall, this had been an enjoyable book as far as atmosphere and criminal mystery--the setting of the story got somewhat creepy at some moments, even if not spine-tingling eerie. But I really DO feel like the characters are becoming increasingly identical in narrative POV voices, and almost entirely useless since their paranormal psychic skills didn't get them anywhere the mysterious kidnapper didn't let them get to. On top of that, I'm not even entirely sure I know what happened in this book aside from what the summary blurb mentions about people disappearing into thin air with no clues, about the dark being a factor in their disappearances (hence the title of the book, Fear the Dark), and about our local law enforcement and Bishop's Special Crimes Unit sending in aid.

Because after all of that setup happened, the rest was really just a blur of dragging investigations, a lot of sitting around and contemplating possibilities and formulating ideas about what might have happened... and then The End. I'm sure much more happened than that, but to me, it was very much all a blur.