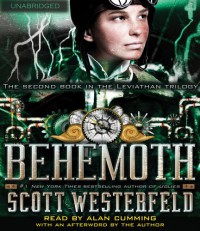 The behemoth is the fiercest creature in the British navy.  It can swallow enemy battleships with one bite.  The Darwinists will need it, now that they are at war with the Clanker powers.

Deryn is a girl posing as a boy in the British Air Service, and Alek is the heir to an empire posing as a commoner.  Finally together aboard the airship Leviathan, they hope to bring the war to a halt. But when disaster strikes the Leviathan's peacekeeping mission, they find themselves alone and hunted in enemy territory.

Alek and Deryn will need great skill, new allies, and brave hearts to face what's ahead.

If I wanted to be honest with myself, I both don't remember much about this book, but also very much enjoyed listening to it.  I can see that Behemoth sort of suffers from that second book syndrome--at least in my case, it didn't do much for me--and yet, at the same time, there were a lot of new character developments that helped propel the book forward.

I won't reiterate the concept behind the Leviathan series--the whole Darwinists versus Clankers of World War I.  But I DID find the introduction of the Perspicacious loris quite fun.  It DID take some time before I could picture the creature in my head... and probably would have benefited from going out and doing a search for an artist's rendering.  After all, for the longest time, I thought it was some sort of reptilian creature until the narrative started mentioning its fur.  Of course, that was my own stupid imagination considering a loris is, indeed, a cute little primate thing... duh.

And in the book, it is a cute little primate thing, and it tends toward repeating words, alerting useful noises, giving our main characters insights and clues; and having it in the background softened a lot of the darkness of the impending war.

Meanwhile, character and story-wise, the plot was interesting to an extent, but I found that it felt like there was entirely too much going on.  And a lot of the actions of our characters didn't really make a whole lot of sense.  I would almost agree with Count Volgar that Alek's actions were a bit foolish, as he so readily reveals his identity as the runaway prince from Austria-Hungary to everyone.  And all because he's got this notion that he was the one who needed to end the war somehow.  I'm not entirely sure that Alek remembers he's just a kid, and a prince who's being hunted.

And while I had mentioned that there was a lot of new character developments, I'm not entirely sure that those developments really lasted.  Alek and Deryn learn more about each other, and their friendship seems to get that much tighter.  The introduction of Lilit to create a bit of romantic tension was interesting, but I'm not sure quite necessary for the romantic tension.

This story, after all, still reads a bit juvenile in voice, and I have a hard time picturing any kind of romance developing at all.  As far as I'm concerned, Deryn and Alek are just best friends even as there is constant mention of how Deryn has developed feelings for Alek.

In spite of all of my complaints and quibbles of this particular installment of Leviathan, however, I found myself immensely enjoying the forward progress starting from the last half of the book.  As I'd mentioned in my review of Leviathan, I found the narration that follows Deryn the most interesting.  In contrast, I found Alek's parts of the story a bit lacking, and I'm not sure what it is about Alek I don't really like--maybe too much of his "Woe is me, but I'm the chosen one" attitude?

When Deryn and Alek reunite towards the middle half of the book, things felt like they were finally going somewhere.  But while there was a lot of action, the whole course of the series plot still felt a bit stagnant.  Thus is the fate of being the second book in a trilogy, I suppose.

Meanwhile, even as I write this review, I'm almost done with the last book and probably ready to write its review.  This pretty much tells anyone, myself mainly, how much I'm enjoying this trilogy even in spite of all my complaints.  Blinders... they're always good for something, right?  =D