The principles of physics lie behind many of the ways animals go about their daily lives.  Scientists have discovered that the way cats and dogs lap up liquids can be explained by the laws of surface tension, how ants navigate is due to polarized light, and why pistol shrimps can generate enough force to destroy aquarium glass using their "elbows!"

Each of Furry Logic's six chapters tackles a separate branch of physics and, through more than 30 animal case studies, examines each creature's key features before describing the ways physics is at play in its life, how the connection between physics and animal behavior was discovered, and what remains to be found out.  Science journalists Matin Durrani and Liz Kalaugher make the incredible interdisciplinary world of animals accessible to all, in an enthralling and entertaining read.

I skipped update posts for Chapters 5 and 6 for my own reasons, as I was more determined to finish what was left of the book than I was in making updates.  This book took a bit longer for me to complete than I'd expected, but life has been quite busy, and there were other books I was wanting to read.  But I've been enjoying Furry Logic, and so I was quite determined to get it read, rather than delegating it to the 'DROPPED' or 'ON HOLD' pile.  The only thing that had been keeping me were other obligations, really, and nothing to do with the book itself.

The truth is, Furry Logic was a formidable read, not exactly a hundred percent enticing, but at the very least, it was presented in a way that I found enjoyable and tolerable.  It doesn't escape my notice that I HAD found parts of this book a little bit boring (which would explain why it was so easy to set it aside for a couple weeks without touching it), and that while the chattiness of the writing style would have bugged me in other books (certain previous Flat Book Society reads), it actually ended up growing on me in this book.

I think the main appeal is that the authors stuck with the subject they promised to present: "The Physics of Animal Life."  There were no random tangents into random historical moments that had nothing to do with the subject, and there were no prolonged, unnecessary ramblings about key people who contributed to the science of certain studies of discoveries.  The authors stuck to their animals, presenting each topic of physics with several examples... and to be honest, that was interesting enough for me.

As much as I hate to compare and contrast certain books, it's hard not to do so.  While certain previous books tended towards mocking or condescending tones, I found this book rather sincere in its presentation.  The authors are immensely fascinated with their subjects, with the animals in this world, and with the way in which physics and biology work together to explain how and why animals do the things they do.  They bring up key names and players in all of the studies presented, and keep to the facts, with maybe a few odd one-liner quips that in no way insult said key people nor their studies.  And in that presentation, I found myself fascinated by the world that this book was presenting to me... enough that I really DID start doing my own searches for pictures, videos, and other information about the gecko, or the pond-skater, or the mantis shrimp.

If I were honest, this book wasn't the best in the world, as I'd mentioned earlier, it DID end up getting a little boring in certain places.  And in fact, between those last two chapters, I found that I'd sort of forgotten what Chapter 5 was about, having to go back to confirm that there was something to do with turtles and magnets and electricity or something. 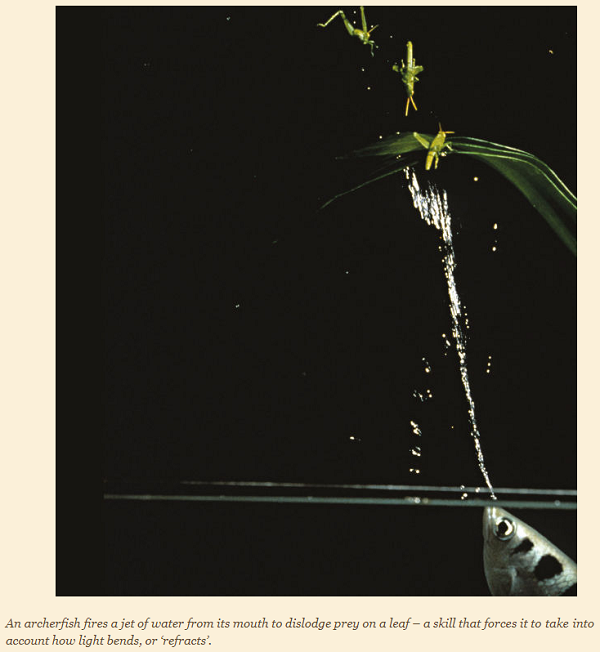 Chapter 6 was a bit more interesting with the archerfish and how it spits at prey above the surface of the water to obtain food.  I found some of the light scatter analogies a bit tacky (Zombies crossing a line?  Really?), but overall, it was an enjoyable chapter that had me finishing the book a lot earlier than I'd thought I would (I was under the assumption that it would probably be another week or so before I finally finished this book).

Overall, while this book DID provide a lot of science about the animals and the physics presented, it also feels like a rather "skim the surface" type of "facts list" book, where the subject is interesting enough to keep your attention, but not quite enough to satisfy your curiosity.

I will give a kudos to the photo plates that present at the end of my Kindle edition.  Those were neat to look at, and also gives a nice recap summary of the highlights of this book.

Here are a couple of my favorites, including the archerfish photo plate above: 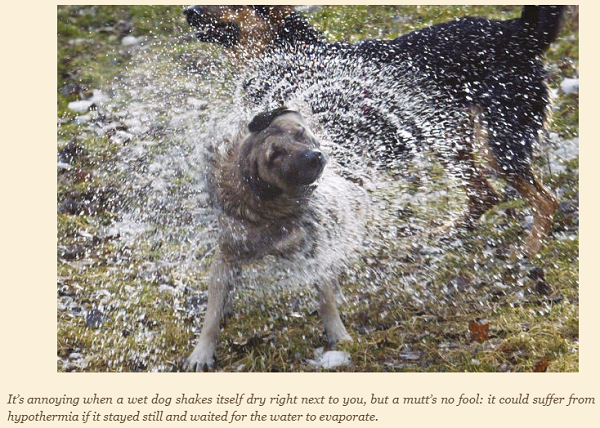 I like how they were able to capture the trajectory and movement of the water while the dog is shaking.  And also, doggy is just cute.  And also, poor doggy in the background is probably getting drenched.  O.O

This particular photo plate, I just found fascinating, as I had trouble picturing the mosquito expelling that drop of blood while feeding.  It's not the prettiest picture in the world, but it still comes off rather artistic... in a physics kind of way.  If that makes any sense.