by LynDee Walker
Book 1 of A Nichelle Clarke Crime Thriller

Crime reporter Nichelle Clarke is covering the deaths of two young police officers near Richmond, Virginia. On the surface, it looks like a tragic accident. But as she digs deeper into the investigation, Nichelle realizes that all is not as it seems.

Someone is trying to cover their tracks.

Nichelle is struggling to put the pieces together, until a seductive Mafia boss shows up with the headline tip of a lifetime. But each step closer to the truth becomes exponentially more dangerous. And her investigation soon transforms into a murderous game of cat and mouse. 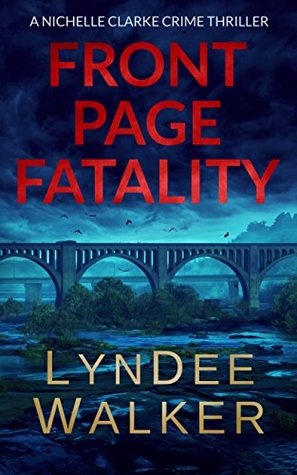 On a side note:  I like the newer covers for this series.  It's been noted that LynDee Walker was able to get the rights to all of her books, thus giving her the opportunity to repackage her series.  Each book gets a brand new, grittier looking cover illustration, and the whole series gets a brand new title as well, having previously been known as A Headlines in High Heels Mystery, which I can see why it had been given this series title in the first place, but doesn't really show you that there's so much more to the story than Nichelle's love for fancy heels of all kinds.

Now, moving right along to the review:

Front Page Fatality is an extremely enjoyable and strong start to the Nichelle Clarke Crime Thrillers, and definitely has a lot of potential to continue on being great if the rest of the books follow along the same vein.

The story is fast-paced and the murder investigation keeps you on your toes.  To be honest, I really didn't know what to think and who I thought would end up the ultimate culprit of the murders, and of the drug evidence disappearing.  I wasn't surprised at the ending, but was kept guessing throughout.  As others have mentioned, this book feels much grittier than your typical cozy mystery, with constant action from the beginning, all the way till the end, and even a darker atmosphere than your typical, humorous cozies.  The characters are all interesting in their own way, and I hope to see more of them in the rest of the series.

I especially loved our heroine, Nichelle Clarke, who isn't the typical badass independent woman, nor is she a giggling, swooning damsel either.  Nichelle is resourceful, smart, and doesn't spend her time pining after the first man who gives her a mega-watt smile.  I also love that she's not out to be TSTL material, even though she DOES manage to get herself into trouble a couple times--at least she openly admits that getting herself killed was never the plan.

She also reacts appropriately when she finds a strange man in her home who shouldn't be there... sort of.  I would have liked a lot less talking and a lot more dialing of 9-1-1, but I'm guessing Nichelle had her reasons; though I don't really approve of her still finding Mr. "Call me Joey" attractive after he'd just broken into her home.  I DO appreciate her then spending the time searching her home and locking all of her doors and windows following that little incident, and keeping vigilant about it even a day or two later.

I also love Nichelle's relationship with Bob, her boss--a pseudo-father-daughter relationship, if you will.  I like how they kind of take care of each other.  I hope to see more of that in upcoming books.

The side characters could have been fleshed out a little more.  Grant Parker felt like he should have been more interesting than he actually comes off.  Nichelle's best friend, Jenna also feels like another tangent waiting to be told.  And then Nichelle's police detective source, Aaron ended up disappearing for a good portion of the book.  So, ultimately, as I'd mentioned already, I DO hope to see more of these people in future books, if only because there is SO much potential going on there.

The only one thing that DID bug me about this book were the constant commentary about Nichelle's co-worker, Shelby--it felt in bad taste, honestly.  What people do in their romantic and/or sex lives is no one else's business, and using that as an attack against Shelby so much was uncalled for and unnecessary.  No matter that Shelby was a big bitch to Nichelle all the time--you can dislike her for her general attitude and rude behavior, but there's no need to stoop to attacking her bedroom habits.

I had figured Nichelle to be above that, considering she'd been able to hold her tongue against Les, the temporary stand-in when her boss, Bob has a heart attack.  Les was a standard asshole who kept the insults coming and I had so, so wanted her to retort back at least once.  But she held her tongue every single time, even after he kept insinuating that she was playing hooky and not taking her job seriously enough.

Nichelle's behavior towards Shelby is a different matter, however, from the fact that Shelby's "sleeping with the boss to advance her career" side-fact had to be brought up at all.  Truthfully, I had been so ready to be happy about Nichelle and Shelby's relationship being one of friendly rivalry of some sort when Nichelle mentions how Shelby is good at what she does, and could even potentially work the police and crime beat if she got the chance.  But then we pull the slut-shaming card and I just felt a bit frustrated.

I appreciate that Nichelle and Charlie, a television news reporter, have the friendly rivalry going on, but Charlie barely makes an appearance in the book.  It would have been nice to see more of this between Nichelle and Shelby, rather than just making Shelby out to be the stereotypical "Mean Girl."

But anyway, this book was overall entirely enjoyable, and I was very satisfied with it.